Faith, Film and Philosophy : Big Ideas on the Big Screen 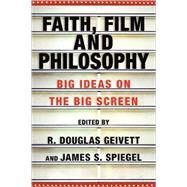 "Those who tell stories rule society." Plato So who today are our principal storytellers? Not philosophers, but filmmakers. For those who know both the enormous entertainment potential and the culture-shaping power of film, this book will stir mind and imagination. For great stories freight world-sized ideas, ideas worthy of contemplation and conversation. Great cinema inspires wonder. But another philosopher, Aristotle, reminds us that wonder is the true source of philosophy. So perhaps Plato or Aristotle might have a shot at ruling society, even today if they took an interest in film. These fourteen essays consider classic and current films together with several major philosophical themes, all within the context of Christian faith: (1) the human condition, (2) the human mind and the nature of knowing, (3) the moral life, and (4) faith and religion. Citizen Kane, Big Fish and Pretty Woman contribute to an in-depth consideration of the human condition. The Truman Show, The Matrix, Being John Malkovich and It's a Wonderful Life, among others, illuminate reflection on the human mind and the nature of knowing. Looking at the moral life, contributors interact with such notable films as Pleasantville, Bowling for Columbine, Mystic River and The Silence of the Lambs. The final section pursues the theme of faith and religion traced through a number of Hong Kong martial arts films, Contact, 2001: A Space Odyssey and U2's music documentary Rattle and Hum. A veritable film festival for all those who want to nurture the wonder of philosophical inquiry and the love of Christian theology through an engagement with the big ideas on the big screen. Features and Benefits Addresses standard philosophical themes covered in both introductory and upper-division philosophy courses Uses movies from popular culture to explore the questions raised
What is included with this book?