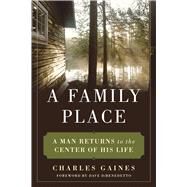 In the summer of 1990, writer Charles Gaines and his artist wife, Patricia, bought 160 acres of wild land on the northeast coast of Nova Scotia. They believed they were simply buying a remote getaway spot, but within a few months a more complex dream for the property developed. By midwinter, they had begun to see the land as a place where family intimacy might be reclaimed, as a home that might heal their recently battered marriage, and as an opportunity to take on a big, risky, long-term project instead of settling into the caution and gradual losses of middle-class middle age. Enlisting their children and their daughter’s carpenter boyfriend, they decided to build a cabin on the land the following summer, to build it with their own hands, as a family venture.

A Family Place gracefully mixes a narrative of that summer’s sometimes harrowing, sometimes hilarious, sometimes heartbreaking events with passages of the family’s history that show its members as real people and dramatize what is at stake for each of them in Nova Scotia. Gaines describes the process of building a cabin while living in tents without electricity or running water, and the pleasures and limitations of a life so simplified that a week’s biggest social event is a bonfire. He draws a deft portrait of the small, generous, hearth-centered Acadian community of farmers and lobster fishermen surrounding their land, and traces the history of that land to its original French-Acadian owner. And he tracks the mood of his family through the long, difficult summer, from initial enthusiasm to near mutiny, and finally to exhilaration and deep satisfaction at having built something that will last, having rebuilt a family in the process.
Charles Gaines is the author of the National Book Award finalist Stay Hungry and the international nonfiction bestseller Pumping Iron, as well as being a lifelong sportsman and outdoor adventurer. He serves as US director of the Atlantic Salmon Federation and is a founder and lifetime board member of the US Fly Fishing Team. He lives in Nova Scotia, Canada, and Birmingham, Alabama.
Dave DiBenedetto is the senior vice president and editor-in-chief of Garden & Gun magazine. He is also the author of On the Run: An Angler’s Journey down the Striper Coast. DiBenedetto lives in Charleston, South Carolina.
Alexander Bridge is a writer and journalist, whose work has appeared in the Montreal Star, the Winnipeg Free Press, the Ottawa Citizen, and the Boston Globe, among others. He lives in Boylston, Nova Scotia.