Fighting Auschwitz The Resistance Movement in the Concentration Camp 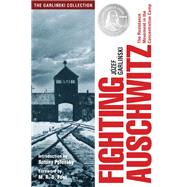 The incredible story of underground resistance among the prisoners at the infamous Auschwitz concentration camp.

When the Germans opened Auschwitz in June 1940, it was a concentration camp for political prisoners, who were told on arrival that they would live no longer than three monthsexpanding two years later to also become a death camp for Jews.

Underground resistance appeared at Auschwitz very quickly, spearheaded in 1940 by one of the bravest men ever to live, Polish army officer Captain Witold Pilecki. Józef Garlinski traces the evolution and operations of the principal resistance organizations among the prisoners (including communist as well as non-communist groups). He delves into the relationships among these groups, as well as their relationships with the various political and multinational factions in the prisoner population, including both male and female, and with the underground outside the camp. He describes their efforts against the brutal SS men and informers. In parallel, he documents the growth and evolution of Auschwitz itself, and the horrors of the industrialized death factory for Jews created by the Germans.

First published in English in 1975, but out of print for decades, this seminal book is now being released in a new 2nd edition with more than 200 photos and maps, and a new introduction by Prof. Antony Polonsky, Emeritus Professor of Holocaust Studies, Brandeis University, and Chief Historian, POLIN Museum of the History of Polish Jews. .

Garlinski, a member of the Polish underground during WWII, was himself a prisoner at Auschwitz.

With more than 200 photos and maps, five Appendices, extensive Bibliography and detailed Indexes.

Józef Garlinski (19132005) was a preeminent author, historian and chronicler of World War II, and particularly of Poland's less well-known role as one of the Western Allies. On many topics his work was seminal, laying the foundation for later research and histories. A member of the Polish underground during the war, Garlinski was arrested by the Germans and sent to Auschwitz. He survived, and after the war Garlinski settled in England. Retiring from a successful business career, Garlinski obtained his Ph.D. from the London School of Economics. His dissertation topic, the resistance movements at Auschwitz, became the book Fighting Auschwitz. Garlinski was prominent in the Polish émigré community in the UK, and continued as an active author and speaker throughout the remainder of his life.

Józef Garlinski (19132005) was a preeminent author, historian and chronicler of World War II, and particularly of Poland's less well-known role as one of the Western Allies. On many topics his work was seminal, laying the foundation for later research and histories. Fighting Auschwitz: The Resistance Movement in the Concentration Camp, is one such book, being the first to disclose to the public the existence, structure, principal participants and other details of resistance movements among the prisoners at Auschwitz. Originally published in the mid-1970s, the English-language version of the book has been out of print for decades and is now being reissued in this new edition.

Born in Kiev, at that time part of the Russian Empire under the last Tsar, Garlinski was educated in Poland after that country regained its independence in 1918. He completed his military service at the cavalry school in Grudziadz, and had begun to study law at the University of Warsaw when World War II broke out.

He fought and was wounded in the September 1939 campaign. When Poland was soon overrun by both the Germans and the Soviets, Garlinski joined the Polish underground where he held several positions, including intelligence liaison with underground members confined in Pawiak prison. In 1943, he was arrested by the Germans and sent to Auschwitz, where he was incarcerated in the Penal Company in Birkenau, and eventually transported to concentration camps at Neuengamme and Wittenberge.

Following the war, Garlinski settled in England with his Anglo-Irish wife Eileen, whom he had married in Warsaw during the first week of the war (and who herself was a member of the Polish underground throughout the war). Retiring from a successful business career, Garlinski obtained his Ph.D. from the London School of Economics. His dissertation topic, the resistance movements at Auschwitz, became the book Fighting Auschwitz. Garlinski was prominent in the Polish émigré community in the UK, and continued as an active author and speaker throughout the remainder of his life.

OTHER BOOKS BY JOZEF GARLINSKI:

Dramat I Opatrznosc (Drama and Providence)

Matki I Zony (Mothers and Wives)

W Czterdziesta Rocznice (On the 40th Anniversary: The Agony, Battle and Death of the
Warsaw Ghetto--Marek Edelman: The Ghetto Fights)

Swiat Mojej Pamieci (The World of My Memory)

Chapter 1
1. Voluntarily to Auschwitz
2. Undercover Mission
3. The German Plans for Auschwitz
4. Construction and Early Days of Auschwitz
5. Witold Pilecki Arrives in Auschwitz
6. Organization and Administration of the Auschwitz Camp
7. Use of Prisoners in the Camp Administration
8. Himmler's Visit to Auschwitz
Notes to Chapter 1

Chapter 2
1. The Development of Underground Work in the Camp
2. The First Five'
3. The Polish Underground
Notes to Chapter 2

Chapter 3
1. The Underground Organization in the Neighbourhood of the Camp
2. Secret Work in the Hospital
3. The First Reports to London
4. The Organization of Labour and Underground Workers in Key Positions
5. The Orchestra; Collective Responsibility for Escapes
6. The GermanSoviet War
Notes to Chapter 3

Chapter 4
1. The First Deaths from Gassing
2. The Fourth Five'
3. Agreement Between the Military and Political Groups
4. The Building of Birkenau and Other Sub-Camps
5. Forced Labour in Auschwitz
6. The Extermination of the Jews
Notes to Chapter 4

Chapter 5
1. The Underground Network in Birkenau
2. Pilecki's Contact with the Czechs
3. The Radio Transmitter
4. The Underground's First Escapes
5. Revolt in the Penal Companies
6. Further Unification of the Military Groups
Notes to Chapter 5

Chapter 7
1. Losses Among the Underground
2. Help from Outside the Camp
3. The Partisan Units
4. Pilecki's Escape
5. Pilecki Reports to his Home Army Superiors
Notes to Chapter 7

Chapter 8
1. Summary of the Previous Period
2. Underground Leadership After Pilecki's Escape
3. Overview of Nationalities and Ethnic Groups at Auschwitz
4. The Austrian Group
5. The French Group
6. The Soviet Group
7. Other Groups
8. Formation of the Kampfgruppe Auschwitz
Notes to Chapter 8

Chapter 9
1. The Surveyors' Kommando
2. SS Morale
3. Conditions in the Hospital
4. Liquidation of the Leaders of the Polish Military Underground
5. The New Commandant and Changes in the Camp
6. Influence of Hermann Langbein
Notes to Chapter 9

Chapter 10
1. Further Action by the Underground
2. Changes at the Hospital; Obliterating Traces of Crimes
3. The Book of the Bunker
4. Liquidation of the Hungarian Jews
5. Changes in the Underground
Notes to Chapter 10

Chapter 11
1. Escapes and Partisans
2. The Moll Plan
3. The Revolt in the Sonderkommando
4. Preparations for the Relief of the Camp
5. The Underground's Final Actions
6. Evacuation
Notes to Chapter 11

Appendices
1. Subsequent Fate of the More Important Persons Mentioned in the Text
2. Additional Notes on Various Matters
3. Underground Members at Auschwitz and Those Who Helped Them
4. SS Ranks with Comparable Ranks in the British Army
5. Comments and Corrections