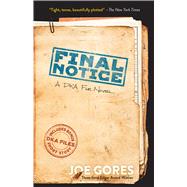 An aging beauty's red Cadillac is repossessed by the bank but quickly returned, thanks to a comic book on its front seat stuffed with $500 in new bills. The repo agency, Dan Kearny Associates, has accidentally interfered with a mob payoff. When one of their agents suffers a savage beatdown by a pair of underworld goons, the DKA team is plunged into a dark mystery involving a former porn star, a blackmail scheme, and a series of murders.
Author Joe Gores was hailed by critic Anthony Boucher as "one of the very few authentic private eyes to enter the field of fiction since Dashiell Hammett." The three-time Edgar Award winner's firsthand experience as a detective adds a tough realism to Final Notice, the second book in his DKA File series. This new edition includes a bonus DKA short story by Gores, "File #10: The Maimed and the Halt."

"Gores writes some of the hardest, smoothest, most lucid prose in the field." — The New York Times Book Review
Joe Gores (1931–2011) won Edgar Awards in three separate categories: Best First Novel, Best Short Story, and Best TV Series Segment. His many day jobs included truck driver, bodybuilding instructor, carny, and English teacher at a boys' school in Kenya as well as a dozen years as a private investigator in the San Francisco area. His work repossessing cars provided grist for the mill of his DKA series, making them — in the words of Ellery Queen — "[as] authentic as a fist in your face."