Firefly: Return to Earth That Was Vol. 1 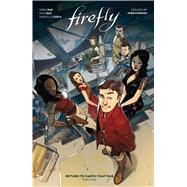 New Characters, New Enemies and a New Era starts here for Firefly, as the series jumps forward in time after the battle with the Reavers that left Wash & Book dead.

NEW CHARACTERS! NEW ENEMIES! A NEW ERA STARTS HERE! For the FIRST TIME, it’s the most-demanded Firefly story ever, as the series jumps forward in time after the battle with the Reavers that left Wash & Book dead. Serenity soars again, with Kaylee captaining a crew including River, Jayne and the bandit Leonard Chang-Benitez. But they’ll soon find themselves drawn into a shocking conflict that means Zoe - along with her toddler Emma - and old friends must rejoin the crew...except for Mal Reynolds. The superstar creative team of Greg Pak (Star Wars), Pius Bak and Ethan Young send Serenity off on the last mission they ever expected, one that will bring them to the EARTH THAT WAS for the first time in Firefly history! Collects Firefly #25-28.
Greg Pak is a New York Times best-selling author behind the Planet Hulk storyline that inspired the hit film Thor: Ragnarok. He’s earned acclaimed with best-selling stories featuring all the biggest characters in comics - such as Superman, X-Men, James Bond, Star Wars and more - along with creating exciting new additions to those universes, like breakout character Amadeus Cho. Recently, Pak completed his popular original series Mech Cadet Yu at BOOM! Studios, which has earned accolades from the New York Public Library, YALSA and the Junior Library Guild. An official continuation of the popular cult favorite TV series Firefly.
What is included with this book?