The Fires of Vesuvius 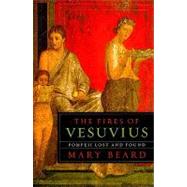 Pompeii is the most famous archaeological site in the world, visited by more than two million people each year. Yet it is also one of the most puzzling, with an intriguing and sometimes violent history, from the sixth century BCE to the present day.

Destroyed by Vesuvius in 79 CE, the ruins of Pompeii offer the best evidence we have of life in the Roman Empire. But the eruptions are only part of the story. In The Fires of Vesuvius, acclaimed historian Mary Beard makes sense of the remains. She explores what kind of town it was more like Calcutta or the Costa del Sol? and what it can tell us about ordinary life there. From sex to politics, food to religion, slavery to literacy, Beard offers us the big picture even as she takes us close enough to the past to smell the bad breath and see the intestinal tapeworms of the inhabitants of the lost city. She resurrects the Temple of Isis as a testament to ancient multiculturalism. At the Suburban Baths we go from communal bathing to hygiene to erotica.

Recently, Pompeii has been a focus of pleasure and loss: from Pink Floyds memorable rock concert to Primo Levis elegy on the victims. But Pompeii still does not give up its secrets quite as easily as it may seem. This book shows us how much more and less there is to Pompeii than a city frozen in time as it went about its business on 24 August 79.

Pompeii may still confuse and challenge, but Beard's informative reappraisal vividly evokes the way it was. And travelers will welcome her practical advice on making a visit.-Judith Chettle Richmond Times Dispatch 20090301

It is the long vanished life of Pompeii that Mary Beard evokes in all its detail and complexity in her new book She gives us Pompeii itself, with its smells and swill, its sex and superstition, its poverty and pathos. It is a wholly successful evocation, pieced together from a deep knowledge of a frighteningly large bibliography.-G. W. Bowersock New Republic 20090701

Mary Beard has a Chair of Classics at Cambridge and is a Fellow of Newnham College. She is classics editor of the Times Literary Supplement and author of the blog "A Don's Life." She is also a winner of the 2008 Wolfson History Prize. Her books include The Roman Triumph and The Parthenon (both from Harvard).
What is included with this book?