The Firm The Inside Story of the Stasi 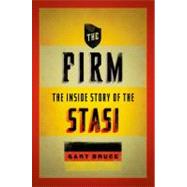 Based on previously classified documents and on interviews with former secret police officers and ordinary citizens, The Firm is the first comprehensive history of East Germany's secret police, the Stasi, at the grassroots level. Focusing on Gransee and Perleberg, two East German districtslocated north of Berlin, Gary Bruce reveals how the Stasi monitored small-town East Germany. He paints an eminently human portrait of those involved with this repressive arm of the government, featuring interviews with former officers that uncover a wide array of personalities, from devotedideologues to reluctant opportunists, most of whom talked frankly about East Germany's obsession with surveillance. Their paths after the collapse of Communism are gripping stories of resurrection and despair, of renewal and demise, of remorse and continued adherence to the movement. The book alsosheds much light on the role of the informant, the Stasi's most important tool in these out-of-the-way areas. Providing on-the-ground empirical evidence of how the Stasi operated on a day-to-day basis with ordinary people, this remarkable volume offers an unparalleled picture of life in atotalitarian state.

Gary Bruce is Associate Professor of History at the University of Waterloo and author of Resistance with the People: Repression and Resistance in Eastern Germany, 1945-1955.
What is included with this book?