The First Men in the Moon 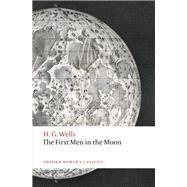 At the village of Lympne, on the south coast of England, the "most uneventful place in the world" the failed playwright Mr. Bedford meets the brilliant inventor Mr. Cavor, and together they invade the moon.

Dreaming respectively of scientific renown and of mineral wealth, they fashion a sphere from the gravity-defying substance Cavorite and go where no human has gone before. They expect a dead world, but instead they find lunar plants that grow in a single day, giant moon-calves and the ant-like
Selenites, the super-adapted inhabitants of the Moon's utopian society.

The First Men in the Moon is both an inspired and imaginative fantasy of space travel and alien life, and a satire of turn-of-the-century Britain and of utopian dreams of a wholly ordered and rational society.

Professor Simon J. James, Professor of Victorian Literature at the University of Durham. James is editor of The Wellsian, the scholarly journal of the H. G. Wells Society, and the author of Maps of Utopia (2012), the first full-length study of the aesthetics of Wells's writing.