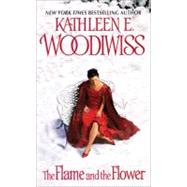 Doomed to a life of unending toil, Heather Simmons fears for her innocenceuntil a shocking, desperate act forces her to flee. . . and to seek refuge in the arms of a virile and dangerous stranger.

The Flame and the Flower

With her first book, Kathleen E. Woodiwiss forever changed the nature of romance novels. Feisty heroine Heather Simmons--young and captivating, thrust into the care of a spiteful aunt first meets Captain Brandon Birmingham after an occurrence that leaves her believing she has killed a man. The chemistry between them is instantaneous, and readers everywhere gasped at this explosive introduction to the special world of Kathleen E. Woodiwiss.

As they entered the captain' s cabin, a man rose from the desk where he had been sitting and, had it not been for her bruised state of mind, Heather would have noticed his tall, muscular build and piercing green eyes. Fawn-colored breeches were fitted snug about his narrow hips and a white ruffled shirt, opened to the waist, revealed a chest wide and firmly muscled beneath a mat of crisp black hair. He had the look of a pirate about him, or even Satan himself, with his dark, curly hair and long sideburns that accentuated the lean, handsome features of his face. His nose was thin and straight except for a slight hook in its profile just below the bridge. His hair was raven black and his skin darkly tanned. White teeth flashed in contrast as he smiled and came forward, sweeping her with a bold gaze from top to toe.

"Aye, you've done a handsome night's work with this one, George. You must have searched hard and wide for her."

"Nay, cap'n," the old man returned. "We found her walking the streets of the waterfront. She came most willingly, cap'n."

The man nodded and walked slowly, deliberately, completely around Heather as she stood rooted to the floor, not touching her with anything but those emerald eyes and they were enough. He paused before her for a moment, smiling, but her eyes would not meet his. She kept them cast downward and stood humbly awaiting some indication of her fate. Behind her the two men grinned, extremely pleased with themselves.

The tall man moved aside with them and the fellow, George, spoke in a low voice. Heather' s eyes moved about the cabin but saw nothing. Outwardly she appeared calm, but the emotional strains raging within her further sapped her strength. She was exhausted, bone tired, confused. She found it difficult to reconcile a magistrate of the law on board a ship, but knowing little of the processes of justice, reasoned that she was probably to be sent to some penal colony, for in her own mind she was guilty of murder.

"Oh God," she thought, "that I should be raised from a sty by the temptation of a life of ease and for my sin plunged into a prison. I killed a man and I've been caught and I must now accept whatever fate decrees for me."

Her mind stopped and held and was trapped by these final facts. She was guilty. She was caught. Justice had done with her and she had no further word. She did not hear the door close behind her as the seamen left, but words from the man who stood before her roused her from her thoughts. He laughed gently and made a sweeping bow.

'Welcome back, m'lady, and I repeat, what is your name."

"Ah," he sighed. "A small, tempting flower from the moors. It's a most lovely and fitting name, m'lady. Brandon Birmingham is my name. Most of my friends call me Bran. Have you dined this evening?"

She made a small nod.

"Then perhaps some wine, a very fine Madeira," he asked.

She shook her head slowly, dropping her gaze to the floor. He laughed softly and came forward to stand close before her. He took the bundle she clutched and tossed it in a nearby chair as he stared down at her, dazzled by her youthful beauty and the gown that seemed only a sparkling veil over her body. Her ivory skin glowed softly in the candlelight, and by the golden flames he saw before him a small woman, gracefully slender with breasts full and round, generously and temptingly swelling above her gown. They rose and fell slowly.

He moved closer and in a rapid movement slipped his arm about her narrow waist, nearly lifting her from the floor, and then covered her mouth with his, engulfing Heather in a heady scent, not unlike that of a brandy her father had been fond of. She was too surprised to resist and hung limp in his embrace. She saw herself as if from outside her body and felt with mild amusement his tongue parting her lips and thrusting within. From a low level of consciousness there grew a vague feeling of pleasure and, had the circumstances been different, she might have enjoyed the hard, masculine feel of his body against hers.

The Flame and the Flower. Copyright © by Kathleen Woodiwiss. Reprinted by permission of HarperCollins Publishers, Inc. All rights reserved. Available now wherever books are sold.

Excerpted from The Flame and the Flower by Kathleen E. Woodiwiss
All rights reserved by the original copyright owners. Excerpts are provided for display purposes only and may not be reproduced, reprinted or distributed without the written permission of the publisher.