Forever at the Finish Line 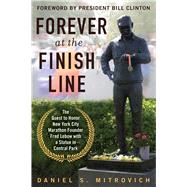 Forever at the Finish Line tells the remarkable and inspiring story of Daniel Mitrovich, a runner from San Diego who had a goal of putting a life-size statue of New York Marathon founder Fred Lebow in Central Park. New York’s parks commissioner Henry Stern said “It will be easier for a camel to go through the eye of a needle than to put a statue in Central Park.” It would not be easy for someone who lacked financial backing and who wasn’t even a New Yorker to make this happen. But with the faith and blessing of Fred Lebow, the support of his family, and his own personal determination, he knew it would happen. His journey involved crossing the continent many times, securing the support of some of the most famous runners of our time, including Joan Benoit Samuelson, Grete Waitz, Alberto Salazar, Bill Rodgers, and Carl Lewis. He would ultimately gain the endorsements of some of the most powerful political people of our time: presidents George Herbert Walker Bush and William Jefferson Clinton, Governor Andrew Cuomo, US senators Alan K. Simpson and Al D’Amato, Mayor Rudolph Giuliani, and thirteen members of Congress. Daniel Mitrovich’s personal story will show you that if you pursue a dream with the right intent you will be “Forever at the Finish Line.”
Daniel S. Mitrovich is the founder of the New York City Marathon Tribute Committee and the creator of the Fred Lebow statue. An honorary lifetime member of the New York Road Runners Club, he has run ten marathons—in New York (three times), Boston (five times), San Francisco (once), and San Diego (once). His personal best is 3:28:37. Mitrovich is the co-founder of the Solution Strategies consulting firm and resides in Culver City, California with his wife, Linda, and their five children.