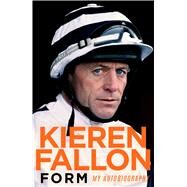 The definitive autobiography from Kieren Fallon, one of the world’s greatest and most controversial horseracing jockeys.

A six-time British Champion Jockey, Kieran Fallon was one of the best jockeys, winning more than 2,250 races, including the UK’s Derby three times, the Prix de l’Arc de Triomphe twice, and more 2000 and 1000 Guineas than anyone else in the history of the sport—but his career was littered with controversial incidents. He was accused of race fixing, resulting in an astonishing Old Bailey trial at which he was completely cleared.

No one would question his ability in the saddle. Few, if any, have ever been as good at coaxing the best out of their rides. But his extraordinary rapport with horses didn’t quite extend to his dealings with people—particularly with those in authority.

Now Fallon recalls his rise from a rural Irish family with no racing connections, and his frequent collisions with the media and many of the people who run the sport. He reveals the huge pressures on top jockeys and how his dazzling riding career was marred, then brought to a premature halt by campaigns of lies and innuendo.

Full of wit and humor, Form is a powerful, honest sporting memoir and a unique behind-the-scenes look at the horseracing industry.