Foucault The Birth of Power 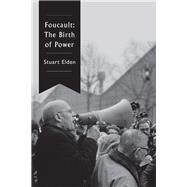 Michel Foucault's The Archaeology of Knowledge was published in March 1969; Discipline and Punish in February 1975. Although only six years apart, the difference in tone is stark: the former is a methodological treatise, the latter a call to arms. What accounts for the radical shift in Foucault's approach?

Foucault's time in Tunisia had been a political awakening for him, and he returned to a France much changed by the turmoil of 1968. He taught at the experimental University of Vincennes and then moved to a prestigious position at the Collège de France. He quickly became involved in activist work concerning prisons and health issues such as abortion rights, and in his seminars he built research teams to conduct collaborative work, often around issues related to his lectures and activism.

Foucault: The Birth of Power makes use of a range of archival material, including newly available documents at the Bibliothèque nationale de France, to provide a detailed intellectual history of Foucault as writer, researcher, lecturer and activist. Through a careful reconstruction of Foucault's work and preoccupations, Elden shows that, while Discipline and Punish may be the major published output of this period, it rests on a much wider range of concerns and projects.

Stuart Elden is Professor of Political Theory and Geography at the University of Warwick and Monash Warwick Professor in the Faculty of Arts, Monash University.
Contents
Acknowledgements
Abbreviations
Introduction: Out of the 1960s
1. Measure: Greece, Nietzsche, Oedipus
2. Inquiry: Revolt, Ordeal, Proof
3. Examination: Punishment, War, Economy
4. Madness: Power, Psychiatry and the Asylum
5. Discipline: Surveillance, Punishment and the Prison
6. Illness: Medicine, Disease and Health
Conclusion: Towards Foucaults Last Decade
Notes
Index
What is included with this book?