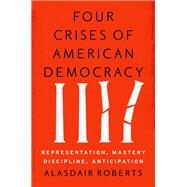 In the last ten years, there has been an outpouring of literature concerned with the crises that impact democracies in our era. Observers have noted a range of causes, including endemic corruption, gross incompetence in delivering basic services, and a corresponding increase in voter disaffection. Lurking in the background as well is the global resurgence of authoritarianism, a wave bolstered by the Western democracies' apparent mishandling of the global financial crisis.

In Four Crises of American Democracy, Alasdair Roberts locates the U.S.'s recent bout of democratic malaise in a larger historical context, arguing that it is the latest in a series of very different crises that have plagued America throughout its history. He focuses on four crises, moving beyond descriptions of what each crisis involved to the solutions the government evolved in response. The first crisis-the "crisis of representation"-occurred in the late nineteenth and early twentieth centuries, and was dominated by fears of plutocracy and debates about the rights of African Americans, women and immigrants. The "crisis of mastery" spanned the years 1917-1948, and was preoccupied with building administrative capabilities so that government could improve its control of economic and international affairs. The "crisis of discipline," beginning in the 1970s, was triggered by the perception that voters and special interests were overloading governments with unreasonable demands. The final crisis, what he calls the "crisis of anticipation," is the crisis we are currently living through. Roberts pronounces it a future-oriented crisis, one preoccupied with the capacity of democratic systems to deal with long-term problems such as the rise of China, and climate change.

Not surprisingly, we have not yet arrived at solutions to this latest crisis, but Roberts suggests that democratic solutions will win out over more authoritarian ones. Preceding crises have been met and resolved using democratic institutions, and this will be true for the current crisis as well. The essential features of the democratic model-societal openness, decentralization, and pragmatism-give it the edge over authoritarian alternatives.

A powerful account of how successive crises have shaped American democracy, Four Crises of American Democracy will be essential reading for anyone interested in the forces driving the current democratic malaise both in the U.S. and around the world.

Alasdair Roberts is a Professor in the Truman School of Public Affairs, University of Missouri. He is a Fellow of the National Academy of Public Administration and co-editor of the journal Governance. Professor Roberts received his law degree from the University of Toronto and his PhD in Public Policy from Harvard University.