Frances Hodgson Burnett's The Secret Garden A Children's Classic at 100 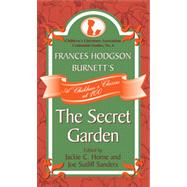 Frances Hodgson Burnett gained famed not only as an author of social fictions and romances but also for writing the immensely popular children's novel Little Lord Fauntleroy. She seemed an unlikely candidate to pen a quiet, realistic, and unsentimental paean to disagreeable children and the natural world, which has the power to heal them. But it is precisely these qualities that have garnered The Secret Garden both a continued audience and a central place in the canon of children's literature for a century. In Frances Hodgson Burnett's The Secret Garden: A Children's Classic at 100, some of the most respected scholars of children's literature consider Burnett's seminal work from modern critical perspectives. Contributors examine the works and authors that influenced Burnett, identify authors who have drawn on The Secret Garden in their writing, and situate the novel in historical and theoretical contexts. These essays push beyond the themes that have tended to occupy the majority of academic scholars who have written about The Secret Garden to date. In doing so, they approach the text from theoretical perspectives that allow new light to illuminate old debates. Scholars and students of children's literature, women's literature, transcontinental literature, and the Victorian/Edwardian period will find in this collection refreshing new looks at a children's classic.