From Guernica to Guardiola How the Spanish Conquered English Football 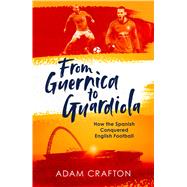 Nowadays, the Premier League is increasingly dominated by Spanish stars, from David Silva to David De Gea, while managers such as Rafa Benitez and Pep Guardiola have helped to transform the way English football is played. But the origins of this particular Spanish invasion date back 80 years to 1937, when the Spanish Civil War led to a stream of refugees fleeing their country for the safe haven of the south coast of England. They learned the game here, before returning to Spain when it was safe to help clubs such as Real Madrid, Barcelona and Athletic Bilbao to La Liga success.
The Franco era broke that link, but in the recent years the reputation of Spain's stars has grown, and every club wants to have a sprinkling of tiki-taka magic in its line-up. Adam Crafton has spoken to many of the key Spanish figures who have come to England to build up a compelling portrait of how they have had such a major impact on the game here. We discover how and why it is that some players, such as Cesc Fabregas and Xabi Alonso, have had great success here, while others have struggled to make an impact. Fernando Torres experienced both extremes. But this is not just a footballing story, pure and simple. Crafton provides the historical and social context that helps to explain how the relationship between the two nations is constantly changing, yet always close. For anyone who enjoyed Jonathan Wilson's Inverting the Pyramid or Sid Lowe's Fear and Loathing in La Liga, this book is a revealing and brilliant insight into this most benign of Spanish invasions.