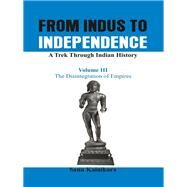 This is the third volume in the Indian history series of books with the generic title, From Indus to Independence: A Trek Through Indian History. It takes up the narrative from the decline of Gupta power when the sub-continent was slipping into chaos, although the Vardhana dynasty stemmed the tide for a limited time.
This volume, The Disintegration of Empires', examines the dynasties that ruled the Deccan with great aplombthe Chalukyas and the Rashtrakutas. It elaborates the progression of the Pallavas and the Pandyas, Cheras and Cholas, who flourished in the Deep Souththe Tamil Country. The book covers the glorious reign of the Chalukyas; the story of the gifted Chola kings and their cultural colonisation of the South-East Asian archipelago; the rivalry between the Pallavas and the Chalukyas that led to the decay of both the dynasties; the glory of the Pandyas; the struggle of the Cheras; and the manifestation of Kautilya's Mandala Theory.
Dr. Sanu Kainikara is an ex-fighter pilot of the Indian Air Force and currently a practising Military Strategist residing in Canberra, Australia. His PhD in International Politics was awarded by the University of Adelaide in Australia. He is the author of 11 books on national security and strategy, and the employment of military forces with a focus on air power.
Author's Preface, Introduction to Volume III, Prologue, The Pushyabhuti or Vardhana Dynasty, Chapter 1 Emperor Harsha Vardhana, Chapter 2 Descend Into Anarchy, The Chalukya Dynasty And Empire, Chapter 3 The Chalukyas: Obscure Origins, Chapter 4 The Chalukyas of Badami, Chapter 5 Pulakesin II: Military Genius Par Excellence, Chapter 6 The Glory of Vikramaditya I, Chapter 7 Chalukyas of Badami: Decline And Fall, Chapter 8 Chalukyas of Badami: Peace And Prosperity, Chapter 9 The Other Chalukyas, Chapter 10 Ruling An Empire, Chapter 11 The Chalukya Empire  A Concluding Appreciation, The Rashtrakuta Dynasty, Chapter 12 The Rashtrakuta Dynasty, Chapter 13 The Rashtrakutas  Secondary Branches, Chapter 14 The Gahadavalas of Kanauj, The Kingdoms of The Deep South, Chapter 15 The Pallava Dynasty, Chapter 16 The Pandya Dynasty, Chapter 17 The Chera Dynasty, Chapter 18 The Chola Dynasty, Bengal Rising, Chapter 19 The Pala Dynasty, Chapter 20 The Sena Dynasty Of Political Theory And Culture, Chapter 21 The Mandala Theory, Chapter 22 Of Political Theory, Law And Literature, Chapter 23 Cultural Colonisation, Conclusion, Bibliography, Index