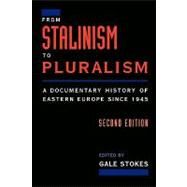 Bringing together a wealth of historical documents, memoirs, essays, and literature from Eastern Europe, this highly successful book vividly illustrates how the most original and challenging minds of the region have understood and reacted to Stanlinism and its successors since the end of the Second World War, ultimately showing how Eastern Europeans have made the journey from Stalinism to a new pluralism. The book creates a rich mosaic of political and historical development in these countries, presenting extracts from the works of Leszek Kolakowski, Czeslaw Milosz, Milovan Djilas, George Lukacs, Vaclav Havel, Adam Michnik, and George Konrad alongside such seminal primary documents as the Yalta Agreement, the Helsinki Accords, and the Gdansk Agreement. Organized chronologically and thematically, a fifth chapter, entitled After the Fall, has been added to create a completely updated and expanded second edition. The new edition covers the critical events attending the rise of Stalinism and the fall of communism in Eastern Europe. Four new readings on the collapse of Yugoslavia into civil war, as well as close to fifty other documents make this reader the most comprehensive and up-to-date textbook on the history and politics of Eastern Europe since the end of World War II.
What is included with this book?