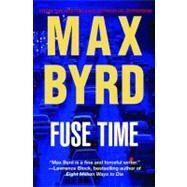 Infused with sly wit and chilling dialogue, this exciting re-release is an action-packed tale of explosions, violence, and sex from acclaimed novelist Max Byrd. Los Angeles is being rocked by a blast wave of terror. Six bombs have exploded unlike any ever seen before-precise, efficient, and unerringly lethal. Only one mind could have build them: Simon Caute. An explosives genius, Simon's work, marked by a macabre wit, has left a signature of smoking ruins and corpses strewn across the continent. Only one man can match Caute for sheer cunning and technical expertisee: David Renner, who risks his job and his life as he races against time to save Jillian Speirs, a beautiful British actress with a violent past. Byrd spins a gripping tale of violence and sex in Fuse Time, the ultimate ticking-clock thriller.
Renner walked six steps to his right, along the tape. The cop swiveled, hitched his gun belt, and watched. A brown-ribbed hillside abutted the building, shaggy with ice plant and as high as the roof. Curiosity seekers stood in knots lower down on the sidewalk. Where the sunlight cut through the shadows and smoke, Renner could see big charred lumps in irregular rows—rugs, he guessed, stacked for display. Whoever had placed the bomb had been smart enough not to blast the tugs themselves, but let the sprinklers and collapsing walls do the damage. At the street end of the tape Renner squinted to study the little piles of office fragments that the bomb technicians were collecting on the pavement and sorting though. He could recognize sheets of blackened and warped metal—desk drawers, parts of filing cabinets—other burned plastic shards that might have been anything at all. The cop followed slowly and tapped his fingers on his holster. Renner sniffed the air, but the fire hoses had left everything soaked though and smelling like wet socks; exhaust from the freeway came over the hill and made his eyes burn.

At the curb he looked back again, past the hood of his little Honda car, to the punched-out windows and bulging cheeks of the devastated walls. “Chaotic and senseless” was what the newspapers always said about a bombing. But no. What a bomb really was, Renner thought, was anger. Murderous, convulsive anger, the sudden explosive release of an unbearable inward emotion. He had never seen a bomb site that didn’t look to him like a human face.