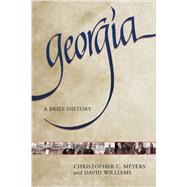 Here, for the first time is a brief, balanced, and up-to-date history of Georgia from the early Indians to the twenty-first century. Based on the most recent research, Georgia: A Brief History surveys the people and events that shaped our state's history in a style that reads easily and flows effortlessly.Beginning with the earliest Indian settlements, the story tells of first contacts between area natives and Spanish from Florida, British from Carolina, and James Oglethorpe leading the effort to found a colony called Georgia. That colony passed out of the British Empire during the American Revolution, a conflict that was as much a civil war as a war for independence. In the following decades, Creek and Cherokee Indians were driven out as Georgia was transformed into a cotton kingdom dominated by a minority of slaveholders, who finally sought to make slavery perpetual in a war that often pitted Georgians against each other.In the aftermath of the Civil War the state struggled with the consequences of the conflict, political, social, and economic. The postwar years were highlighted by economic stagnation, questions over the meaning of freedom, and one-party politics. Race relations pervaded the state's history after the Civil War until well into the twentieth century and those struggles are traced from Reconstruction to Jim Crow to the Civil Rights Era. In the latter half of the twentieth century, and carrying into the twenty-first, Georgia drifted away from the provincialism that characterized its history and moved toward modernity.
Christopher C. Meyers is a professor of history at Valdosta State University where he teaches Georgia history, US political history, and US military history. His previous books include The Empire State of the South and Union General John A. McClernand and the Politics of Command. David Williams is a professor of history at Valdosta State University where he teaches Georgia history, the Old South, and the Civil War era. His previous books include Plain Folk in a Rich Man's War: Class and Dissent in Confederate Georgia and The Georgia Gold Rush: Twenty-Niners, Cherokees, and Gold Fever.