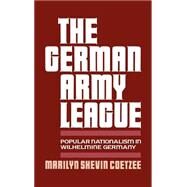 This book traces the development of the German Army League from its inception through the earliest days of the Weimar Republic. Founded in January 1912, the League promoted the intensification of German militarism and the cultivation of German nationalism. As the last and second largest of the patriotic societies to emerge after 1890, the League led the campaign for army expansion in 1912 and 1913, and against the growing influence of socialism and pacifism within Germany. Attempting to harness popular and nationalist sentiment against the government's foreign and domestic policies by preying on Germans' fears of defeat and socialism, the League contributed to the polarization of German society and aggravated the international tensions which culminated in the Great War. Coetzee combines an analysis of the League's principal personalities and policies with an exploration of the inner workings of local and regional branches, arguing that rather than having served solely as a barometer of populist nationalist sentiment, the League also reflected the machinations of men of education and prominence who believed that an unresponsive German government had stifled their own careers, dealt ineffectually with the prospect of domestic unrest, and squandered the nation's military superiority over its European rivals.
What is included with this book?