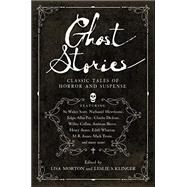 A masterful collection of ghost stories that have been overlooked by contemporary readers—including tales by celebrated authors such as Charles Dickens, Sir Walter Scott, Mark Twain, and Edith Wharton—presented with insightful annotations by acclaimed horror anthologists Leslie S. Klinger and Lisa Morton.

The ghost story has long been a staple of world literature, but many of the genre's greatest tales have been forgotten, overshadowed in many cases by their authors' bestselling work in other genres. In this spine-tingling anthology, little known stories from literary titans like Charles Dickens and Edith Wharton are collected alongside overlooked works from masters of horror fiction like Edgar Allan Poe and M. R. James.

Acclaimed anthologists Leslie S. Klinger (The New Annotated Sherlock Holmes) and Lisa Morton (Ghosts: A Haunted History) set these stories in historical context and trace the literary significance of ghosts in fiction over almost two hundred years—from a traditional English ballad first printed in 1724 through the Christmas-themed ghost stories of the Victorian era and up to the science fiction–tinged tales of the early twentieth century.

In bringing these masterful tales back from the dead, Ghost Stories will enlighten and frighten both longtime fans and new readers of the genre.

Lisa Morton is a screenwriter, author, anthologist, and the editor of the acclaimed Ghosts: A Haunted History. She is a six-time winner of the Bram Stoker Award, a recipient of the Black Quill Award, and winner of the 2012 Grand Prize from the Halloween Book Festival. A lifelong Californian, she lives in North Hills, California, and can be found online at www.lisamorton.com.
What is included with this book?