Giants The Parallel Lives of Frederick Douglass and Abraham Lincoln 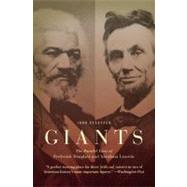 They were the self-made men of their time. Lincoln was born dirt poor, had less than 1 year of formal schooling and became the nation's greatest President. Douglass spent his first 20 years as a slave, had no formal schooling, couldn't read or write and became 1 of America's greatest writers and activists. At a time when most whites would not let a black man cross their threshold, Lincoln met Douglass 3 times at the White House and invited him to tea at the Soldier's Home. Their friendship was based on usefulness: Lincoln saw that he needed Douglass to help him destroy the Confederacy and preserve the Union; Douglass knew that Lincoln's shrewd sense of public opinion would serve his own goal of freeing the nation's blacks. Lincoln and Douglass moved beyond the traditional idea of character as fixed and based primarily on heredity and social status and embraced a self in a state of continual evolution. Award-winning historian John Stauffer describes the dramatic transformations in the lives of these giants during a major shift in cultural history, when men rejected the status quo and embraced new ideals of personal liberty.
John Stauffer is Professor of English and American Literature and Language at Harvard University. His first book, The Black Hearts of Men: Radical Abolitionists and the Transformation of Race (Harvard University Press, 2002), was the co-winner of the 2002 Frederick Douglass Book Prize from the Gilder Lehrman Institue; winner of the Avery Craven Book Prize from the OAH; and the Lincoln Prize runner-up. Other works include: Meteor of War: The John Brown Story (with Zoe Trodd, 2004); Frederick Douglass'My Bondage and My Freedom (editor, 2003). Visit his website at http://johnstaufferbooks.com/.
What is included with this book?