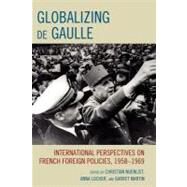 French President Charles de Gaulle (1958-1969) has consistently fascinated contemporaries and historians. His vision âconceived out of national interest âof uniting Europe under French leadership and overcoming the Cold War still remains relevant and appealing. De Gaulle's towering personality and his challenge to US hegemony in the Cold War have inspired a vast number of political biographies and analyses of the foreign policies of the Fifth Republic mostly from French or US angle. In contrast, this book serves to rediscover de Gaulle's global policies how they changed the Cold War. Offering truly global perspectives on France's approach to the world during de Gaulle's presidency, the 13 well-matched essays by leading experts in the field tap into newly available sources drawn from US, European, Asian, African and Latin American archives. Together, the contributions integrate previously neglected regions, actors and topics with more familiar and newly approached phenomena into a global picture of the General's international policy-making. The volume at hand is an example of how cutting-edge research benefits from multipolar and multi-archival approaches and from attention to big, middle and smaller powers as well as institutions.
Christian Nuenlist is foreign desk editor at the Swiss daily Aargauer Zeitung. He is the author of Kennedys rechte Hand (1999) and the coeditor of Origins of the European Security System (2008). Anna Locher is an independent historian and publicist. She is the author of NATO, de Gaulle, and the Future of the Alliance, 1963-1966 (2010) and the coeditor of Transforming NATO in the Cold War (2007). Garret Martin is editor at large with the European Institute, based in Washington, D.C.
What is included with this book?