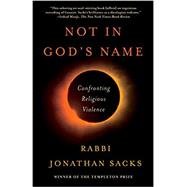 In this powerful and timely book, one of the most admired and authoritative religious leaders of our time tackles the phenomenon of religious extremism and violence committed in the name of God. If religion is perceived as being part of the problem, Rabbi Sacks argues, then it must also form part of the solution. When religion becomes a zero-sum conceit—i.e., my religion is the only right path to God, therefore your religion is by definition wrong—and when individuals are motivated by what Rabbi Sacks calls “altruistic evil,” violence between peoples of different beliefs appears to be the inevitable outcome. But through an exploration of the roots of violence and its relationship to religion, and employing groundbreaking biblical analysis and interpretation, Rabbi Sacks shows that religiously inspired violence has as its source misreadings of biblical texts at the heart of all three Abrahamic faiths. By looking anew at the book of Genesis, with its foundational stories of Judaism, Christianity, and Islam, Rabbi Sacks offers a radical rereading of many of the Bible’s seminal stories of sibling rivalry: Cain and Abel, Isaac and Ishmael, Jacob and Esau, Joseph and his brothers, Rachel and Leah.

Here is an eloquent call for people of goodwill from all faiths and none to stand together, confront the religious extremism that threatens to destroy us all, and declare: Not in God’s Name.
RABBI LORD JONATHAN SACKS is the award-winning author of more than thirty books. He is a frequent and respected contributor to radio, television, and the press around the world and teaches at universities in Britain, the United States, and Israel. Rabbi Sacks holds sixteen honorary degrees and has received many awards in recognition of his work, including the Jerusalem Prize and, in 2016, the Templeton Prize. He served as Chief Rabbi of the United Hebrew Congregations of the Commonwealth from 1991 to 2013.