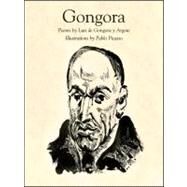 Picasso was first attracted to the work of sixteenth-century Spanish poet Luis de Gongora y Argote during the 1920s, when the poet, called "the father of modern poetry" by Federico Garcia Lorca, was resurrected by the Surrealists. Gongora is comprised of twenty sonnets by the poet, which Pablo Picasso wrote out in hand and further embellished with flourishes, figures and sketches. The artist also rendered twenty portraits to accompany these poems. The result is a blending of word and image, full of imaginary variety and exceptional artistic virtuosity. This bilingual edition ofGongora, featuring a preface by award-winning poet Edward Hirsch and an introduction by former New York Times chief art criticJohn Russell, presents this intimate union of art and poetry. Gongora's sophisticated and complex poetic style inspired a school of literature, called "culteranismo," influenced by his expressive power, unrestrained by the strict conventions of formal Spanish. Known for his sharp wit and self-satire, he was acutely aware of the irony in his passion for women and gambling, and his position as a deacon of the Catholic Church. InGongora, Picasso's handwritten Spanish text, with its embellishingremarquesclosely following the words, established the artist's personal attachment to the poetry. The rich presentation of images--described as a "veritable feminine kaleidoscope"--invites the natural comparison with the great Spanish portraitists Velasquez and El Greco, who were Gongora's contemporaries. This edition ofGongorawill appeal to a broad audience and expose a new generation of readers to the lyrical brilliance of this groundbreaking Spanish poet and to the visual interpretation of his famous admirer. Picasso's etchings, executed in drypoint and aquatint, demonstrate an extraordinary ability to master the elements of light and shade to create rich, sensuous and mysterious effects. Perhaps Picasso's finest graphic accomplishment,Gongorais a memorable visual and literary experience. 40 duotone illustrations.
What is included with this book?