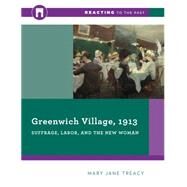 In this Reacting to the Past game, the classroom is transformed into Greenwich Village in 1913, where rebellious free spirits gather. Exposed to ideas like woman suffrage, socialism, birth control, and anarchism, students experiment with forms of political participation and bohemian self-discovery.Reacting to the Past is an award-winning series of immersive role-playing games that actively engage students in their own learning. Students assume the roles of historical characters and practice critical thinking, primary source analysis, and argument, both written and spoken. For more information about the series, visit wwnorton.com/reacting.