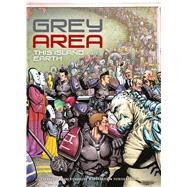 Meet the cops at the front line of alien immigration! Grey Area is a bold dystopian vision; an Alien Nation for the 21st Century! North America, 2045. The Global Exo Segregation Zone (aka the `Grey Area') is a huge holding area in Arizona housing all manner of aliens hoping to visit earth: a melting pot for alien disputes, crime and inter-species misunderstandings! The only thing standing in the way of chaos is the Exo Transfer Control squads: heavily-armed immigration cops that keep the peace and make sure everyone has their papers in order... From contemptuous extra-terrestrial ambassadors with diplomatic immunity, to right-wing xenophobic militants and alien freeloaders disguised as luggage: new recruit Jana Birdy discovers that life in the E.T.C. might be the most interesting job on Earth... and the most dangerous!
Dan Abnett: Dan Abnett is the seven-times New York Times bestselling author and award-winning comic book writer. He has written over fifty novels, including the acclaimed Gaunt's Ghosts series, the Eisenhorn and Ravenor trilogies, volumes of the million-selling Horus Heresy series, The Silent Stars Go By (Doctor Who), Rocket Raccoon and Groot: Steal the Galaxy, The Avengers: Everybody Wants To Rule The World, The Wield, Triumff: Her Majesty's Hero, and Embedded. In comics, he is known for his work on Aquaman, The Titans, Nova, Wild's End, and The New Deadwardians. His 2008 run on The Guardians of the Galaxy for Marvel formed the inspiration for the blockbuster movie. A regular contributor to the UK's long-running 2000 AD, he is the creator of series including Grey Area, Lawless, Brink, Kingdom and the classic Sinister Dexter. He has also written extensively for the games industry, including Shadow of Mordor and Alien: Isolation. Lee Carter has illustrated Dead Eyes, Necrophim, Grey Area, Judge Dredd and numerous one-off strips for 2000 AD.