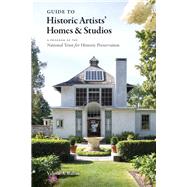 From the desert vistas of Georgia O'Keeffe's New Mexico ranch to Jackson Pollock and Lee Krasner's Hamptons cottage, step into the homes and studios of illustrious American artists and witness creativity in the making. Celebrating the twentieth anniversary of the Historic Artists' Homes and Studios program of the National Trust for Historic Preservation, this is the first guidebook to the forty-four site museums in the network, located across all regions of the United States and all open to the public. The guide conveys each artist's visual legacy and sets each site in the context of its architecture and landscape, which often were designed by the artists themselves.

Through portraits, artwork, and site photos, discover the powerful influence of place on American greats such as Andrew Wyeth, Grant Wood, Winslow Homer, and Donald Judd as well as lesser-known but equally creative figures who made important contributions to cultural history-photographer Alice Austen and muralist Clementine Hunter among them.
Valerie A. Balint is program manager of Historic Artists' Homes and Studios. Based in New York's Hudson Valley, she is former Interim Director of Collections and Research at Frederic Church's Olana (a HAHS site) and a longtime advocate of preserved artists' spaces and public art.