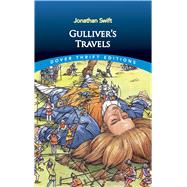 Through a series of shipwrecks and misguided voyages, Gulliver is captured by miniature people who wage war because of a religious disagreement over how to crack eggs; is sexually assaulted by giants; visits a floating island; and decides that the society of horses is better than that of his fellow man. Tough, filthy, and incisive, this playful satire addresses-among other topics-politics, religion, and society is presented here in its unexpurgated entirety. Also included is Alexander Pope's "Verses on Gulliver's Travels," which he wrote for his friend Swift and which were included in very early editions of the book.