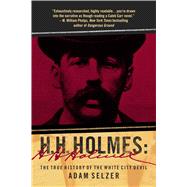 The full, untold story of serial killer made famous in Erik Larson’s international bestseller The Devil in the White City.

Here is the horrific true tale of America's first and most notorious serial killer and his diabolical killing spree during the 1893 World's Fair in Chicago, now updated with a new afterword discussing Holmes' exhumation on American Ripper.

H. H. Holmes is the first comprehensive book examining the life and career of a murderer who has become one of America’s great supervillains. It reveals not only the true story but how the legend evolved, taking advantage of hundreds of primary sources that have never been examined before, including legal documents, letters, articles, and records that have been buried in archives for more than a century. Table of contents:

Though Holmes has become just as famous now as he was in 1895, a deep analysis of contemporary materials makes very clear how much of the story as we know came from reporters who were nowhere near the action, a dangerously unqualified new police chief, and, not least, lies invented by Holmes himself.

Selzer has unearthed tons of stunning new data about Holmes, weaving together turn-of-the-century America, the killer’s background, and the wild cast of characters who circulated in and about the famous “castle” building. This book will be the first truly accurate account of what really happened in Holmes’s castle of horror, and now includes an afterword detailing the author's participation in Holmes' exhumation on the TV series, American Ripper.
Adam Selzer is the host of the Mysterious Chicago blog, podcasts, and tours, and has spent many years researching the more gruesome side of Chicago history—criminals, ghost stories, gangsters, mysteries, and folklore. He regularly writes Chicago history stories for websites such as TimeOut.com and Atlas Obscura, and speaks about it on WGN radio. He lives in Chicago, Illinois.