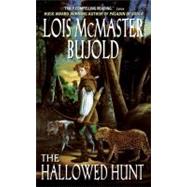 A magnificent epic tale of devotion, possession, obsession, and strange destiny from the author of the Hugo Award-winning Paladin of Souls Lois McMaster Bujold The half-mad Prince Boleso has been slain by a noblewoman he had intended to defile -- and Lord Ingrey kin Wilfcliff must transport the body to its burial place and the accused killer, the Lady Ijada, to judgment. With the death of the old Hallow King imminent and the crown in play, the road they must travel together is a dangerous one. And though he is duty-bound to deliver his prisoner to an almost certain death, Ijada may be the only one Ingrey dares trust. For a monstrous malevolence holds the haunted lord in its sway -- and a great and terrible destiny has been bestowed upon him by the gods, the damned, and the dead.
The Hallowed Hunt

The Prince was dead.

Since the king was not, no unseemly rejoicing dared showin the faces of the men atop the castle gate. Merely, Ingrey thought,a furtive relief. Even that was extinguished as they watched Ingrey'stroop of riders clatter under the gate's vaulting into the narrowcourtyard. They recognized who he was -- and, therefore, who musthave sent him.

Ingrey's sweat grew clammy under his leather jerkin in thedamp dullness of the autumn morning. The chill seemed cuppedwithin the cobbled yard, funneled down by the whitewashed walls.The lightly armed courier bearing the news had raced from theprince's hunting seat here at Boar's Head Castle to the hallow king'shall at Easthome in just two days. Ingrey and his men, though moreheavily equipped, had made the return journey in scarcely moretime. As a castle groom scurried to take his horse's bridle, Ingreyswung down and straightened his scabbard, fingers lingering onlybriefly on the reassuring coolness of his sword hilt.

The late Prince Boleso's housemaster, Rider Ulkra, appearedaround the keep from wherever he'd been lurking when Ingrey'stroop had been spied climbing the road. Stout, usually stolid, hewas breathless now with apprehension and hurry. He bowed. "LordIngrey. Welcome. Will you take drink and meat?"

"I've no need. See to these, though." He gestured to the halfdozen men who followed him. The troop's lieutenant, Rider Gesca,gave him an acknowledging nod of thanks, and Ulkra deliveredmen and horses into the hands of the castle servants.

Ingrey followed Ulkra up the short flight of steps to the thickplankedmain doors. "What have you done so far?"

Ulkra lowered his voice. "Waited for instructions." Worry scoredhis face; the men in Boleso's service were not long on initiative atthe best of times. "Well, we moved the body into the cool. We couldnot leave it where it was. And we secured the prisoner."

What sequence, for this unpleasant inspection? "I'll see the bodyfirst," Ingrey decided.

"Yes, my lord. This way. We cleared one of the butteries."

They passed through the cluttered hall, the fire in its cavernousfieldstone fireplace allowed to burn low, the few red coals halfhiddenin the ashes doing nothing to improve the discomfort of thechamber. A shaggy deerhound, gnawing a bone on the hearth,growled at them from the shadows. Down a staircase, through akitchen where a cook and scullions fell silent and made themselvessmall as they passed, down again into a chilly chamber ill lit by twosmall windows high in the rocky walls.

The little room was presently unfurnished but for two trestles,the boards laid across them, and the sheeted shape that lay silentlyupon the boards. Reflexively, Ingrey signed himself, touching forehead,lip, navel, groin, and heart, spreading his hand over hisheart: one theological point for each of the five gods. Daughter-Bastard-Mother-Father-Son. And where were all of You when thishappened?

As Ingrey waited for his eyes to adjust to the shadows, Ulkraswallowed, and said, "The hallow king -- how did he take the news?"

Ingrey could read little in the housemaster's reaction, except theobvious, that Ulkra was glad to be handing responsibility for this onto someone else. Uneasily, Ulkra folded back the pale cloth coveringhis dead master. Ingrey frowned at the body.

Prince Boleso kin Stagthorne had been the youngest of the hallowking's surviving -- of the hallow king's sons, Ingrey corrected histhought in flight. Boleso was still a young man, for all he had cometo his full growth and strength some years ago. Tall, muscular, heshared the long jaw of his family, masked with a short brown beard.The darker brown hair of his head was tangled now, and mattedwith blood. His booming energy was stilled; drained of it, his facelost its former fascination, and left Ingrey wondering how he hadonce been fooled into thinking it handsome. He moved forward,hands cradling the skull, probing the wound. Wounds. The shatteredbone beneath the scalp gave beneath his thumbs' pressure oneither side of a pair of deep lacerations, blackened with dried gore.

"What weapon did this?"

"The prince's own war hammer. It was on the stand with hisarmor, in his bedchamber."

"How very ... unexpected. To him as well." Grimly, Ingrey consideredthe fates of princes. All his short life, according to Hetwar,Boleso had been alternately petted and neglected by parents andservants both, the natural arrogance of his blood tainted with a precarioushunger for honor, fame, reward. The arrogance -- or was it the anxiety? -- had bloated of late to something overweening, desperatelyout of balance. And that which is out of balance ... falls.

The prince wore a short open robe of worked wool, lined with fur,blood-splashed. He must have been wearing it when he'd died. Nothingmore. No other recent wounds marked his pale skin. When thehousemaster said they had waited for instructions, Ingrey decided, hehad understated the case. The prince's retainers had evidently beenso benumbed by the shocking event, they had not even dared washor garb the corpse. Grime darkened the folds of Boleso's body ... no,not grime. Ingrey ran a finger along a groove of chill flesh, and staredwarily at the smear of color, dull blue and stamen yellow and, wherethey blended, a sickly green. Dye, paint, some colored powder? Thedark fur of the inner robe, too, showed faint smears.

Ingrey straightened, and his eye fell on what he had at first takenfor a bundle of furs laid along the far wall. He stepped closer andknelt.

It was a dead leopard. Leopardess, he amended, turning thebeast partly over. The fur was fine and soft, fascinating beneath hishands. He traced the cold, curving ears, the stiff white whiskers, thepattern of dark whorls upon golden silk ...

The Hallowed Hunt. Copyright © by Lois Bujold. Reprinted by permission of HarperCollins Publishers, Inc. All rights reserved. Available now wherever books are sold.

Excerpted from The Hallowed Hunt by Lois McMaster Bujold
All rights reserved by the original copyright owners. Excerpts are provided for display purposes only and may not be reproduced, reprinted or distributed without the written permission of the publisher.