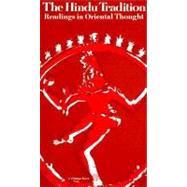 This book, compiled from basic Hindu writings, is an exploration of the essential meaning of the Hindu tradition, the way of thinking and acting that has dominated life in India for the last three thousand years. Selections from religious, literary and philosophic works are preceded by introductory material that summarizes historical developments and cultural movements. While much attention is given to religion, many selections deal with social life, political relationships, and the Indian attitude to human love and passion. The arrangement of the material suggests the growth and development of Indian life through the centuries, and makes clear that Indian culture has never been static, but rather has been characterized at all times by a remarkable vitality and creativity. The selections range in time from the Rig Veda, composed around 1000 B.C., to the writings of Radhakrishnan, formerly the President of India. They illustrate both the continuity of the Hindu tradition and its vitality, for Hinduism is probably more vibrant and alive at the present time than it has been for many centuries. The ideals and values, the unquestioned assumptions and the persistent doubts that are presented here from the literature of the past are the fundamental ingredients of the life of modern India.
Ainslie Thomas Embree was born in Nova Scotia and educated at Dalhousie University in Halifax and Columbia University. He taught Indian history at Columbia University from 1958 to 1969, and was also professor of history at Duke University. He was the President of the American Institute of Indian Studies. Embree retired in 1991. Mr. Embree is the author of Charles Grant and British Rule in India and India’s Search for National Identity. He has been coeditor of several books, including Approaches to Asian Civilizations, Guide to Oriental Classics, and The Development of Civilization. With S. M. Ikram, Mr. Embree has written Muslim Civilization in India.

WM. Theodore de Bary, Carpentier Professor of Oriental Studies at Columbia University, is Provost Emeritus of that university. From 1969–70 he was president of the Association for Asian Studies. He is editor and coauthor of the three-volume Sources of Indian, Chinese and Japanese Tradition; Approaches to Asian Civilization; A Guide to Oriental Classics; and Self and Society in Ming Thought.
What is included with this book?