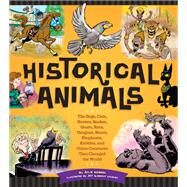 Throughout history, animals have shaped the world as we know it. But rarely have they received the recognition they deserve. Until now.

This inside look at history’s most famous animals features wacky verse, cool facts, historical stats, and zany cartoon art. Meet Alexander the Great’s horse Bucephalus, who was his battle companion for nearly 30 years. Learn about Mozart’s starling bird that helped him write music by singing along as he composed. Read about the Ethiopian goats that discovered the coffee bean, Marco Polo seeing dragons in China, and a dog named Boatswain that saved Napoleon’s life. From the cobra that killed Cleopatra to Cairo, the dog that helped hunt down Osama bin Laden, Historical Animals has these stories and more!
Julia Moberg grew up in Grand Rapids, Michigan, and Southlake, Texas. She atttended New York University where she received both her B.F.A. and M.F.A. in Dramatic Writing at Tisch School of the Arts. She is the author of Skies Over Sweetwater, a young adult novel. She currently splits her time between Paris, France, and Nashville, Tennessee.
What is included with this book?