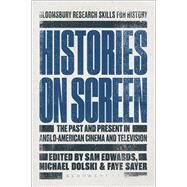 How, as historians, should we 'read' a film? Histories on Screen answers this and other questions in a crucial volume for any history student keen to master source use.

The book begins with a theoretical 'Thinking about Film' section that explores the ways in which films can be analyzed and interrogated as either primary sources, secondary sources or indeed as both. The much larger 'Using Film' segment of the book then offers engaging case studies which put this theory into practice. Topics including gender, class, race, war, propaganda, national identity and memory all receive good coverage in what is an eclectic multi-contributor volume. Documentaries, films and television from Britain and the United States are examined and there is a jargon-free emphasis on the skills and methods needed to analyze films in historical study featuring prominently throughout the text.

Histories on Screen is a vital resource for all history students as it enables them to understand film as a source and empowers them with the analytical tools needed to use that knowledge in their own work.

Sam Edwards is Lecturer in American History at Manchester Metropolitan University, UK. He has published essays discussing various aspects of American war commemoration and he is the co-editor, along with Michael Dolski and John Buckley, of D-Day in History and Memory: The Normandy Landings in International Remembrance and Commemoration (2014).

Michael Dolski is a historian with the Joint Prisoner of War-Missing in Action Accounting Command's Central Identification Laboratory in the USA. Together with Sam Edwards and John Buckley, he is editor of D-Day in History and Memory: The Normandy Landings in International Remembrance and Commemoration (2014).