Holocaust Justice : The Battle for Restitution in America's Courts 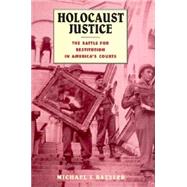 View the Table of Contents . Read the Preface . "Bazyler has written an indispensable history of Holocaust restitution as litigated in US courts. . . . Essential." --CHOICE "Bazyler rightly attacks the commission as an unmitigated disaster and . . . correctly describes the situation as a disgrace." --Financial Times Magazine "Holocaust Justicetells the complete story of the legal campaign to win restitution for Hitler's victims and thus deserves a large reading audience. . . . The Book should remain the standard work on the subject for some time to come." --New Jersey Jewish News "Bazyler . . . gives details of nationwide litigation in which courts rejected the legal basis for such claims. His book is enlightening and provocative." --Los Angeles Times "Michael Bazyler has written an incisive and compelling history of the effort to use law to gain a measure of justice for victims of the Holocaust. Not only is the book an indispensable chronicle of the Holocaust litigation; it is a probing inquiry into the wisdom and morality of the effort." --Burt Neuborne, John Norton Pomeroy Professor of Law, NYU Law School, Lead Settlement Counsel, inHolocaust Victim Assets Litigation ocirc;By patiently walking us through the vast and complex labyrinth of litigation and legislation that focused on securing reparations and restitution, Bazyler shows us that the loss of property caused by the bureaucratic workings of banks, corporations, and insurance companies was even more difficult to prove in court than the loss of life caused by no less bureaucratic workings of the concentration camps.ouml; --Washington Post "In this lucid and compelling book, Bazyler documents the fight for restitution, its successes, and its failures." --Booklist "...A definitive analytical study of how the American courts and system of justice were used to address the mass-scale theft initiated by the Holocaust." --Wisconsin Bookwatch "Bazyler has produced a masterful study of the tragedy and triumphs of the Holocaust, and a look at the American legal system as its most effective and redemptive. The book is a "must read." --International Journal of Legal Information ocirc;A masterly study of the search for justice against long odds. Its analysis is compelling, its importance immense. It is also a fascinating read.ouml; --Daniel Jonah Goldhagen, author ofHitler's Willing ExecutionersandA Moral Reckoning ocirc;An indispensable guide to the complex and controversial struggle for justice in the aftermath of the Holocaust, traversing the history of the battle for restitution in America's courts. Bazyler's understanding is authoritative and his learning deep. I thought I knew all the intricacies of the litigation, all the ins and outs of the controversy until I read this book and learned that there was so much more to know. He has done a masterful job of clarifying and elucidating. This work must be studied by anyone interested in the issue. It is a model of fairness.ouml; --Michael Berenbaum, Sigi Ziering Institute, The University of Judaism ocirc;This book should be read by everyone interested in how some measure of justice was obtained for victims of the Holocaust and about how issues of historical injustice should be addressed by the international community.ouml; --Paul Hoffman, Chair, Amnesty International ocirc;An incisive work of legal history and an invaluable guide to the litigation involvin
Michael J. Bazyler is Professor of Law, Whittier Law School, Costa Mesa, California. He is also Fellow at the Center for Advanced Holocaust Studies, U.S. Holocaust Memorial Museum, Washington, D.C., and Research Fellow, Holocaust Education Trust, London, England.
What is included with this book?