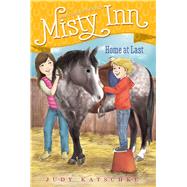 Ben decides he wants his own pony in this eighth book of a chapter book series inspired by Marguerite Henry’s Misty of Chincoteague.

Even though Ben is allowed to ride and groom his sister’s pony, Starbuck, everyone knows Starbuck is really Willa’s pony: the two are inseparable, as close as a girl and pony can be. But then the kids discover a wild, renegade pony plucking apples from a tree. Ben names the pony Winesap, but Willa doesn’t want her brother to grow too attached, as she’s sure they’ll find his original owners and Ben will be heartbroken when he’s returned. But it’s too late, and just like that, Ben and Winesap become the best of friends. Will Ben finally get to have a pony of his own?
Judy Katschke is the author of many books for young readers, from ready-to-reads and chapter books, to middle grade fiction and nonfiction. She lives in New York City.

Serena Geddes has been illustrating children’s books since 2009. She has illustrated the Lulu Bell books and has also worked for Walt Disney Animation Australia on sequels to The Lion King, Peter Pan Return to Neverland, Lady and the Tramp, and The Jungle Book.