How Do I Save My Honor? War, Moral Integrity, and Principled Resignation 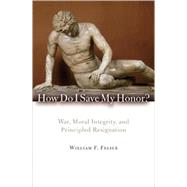 How Do I Save My Honor? is a powerful exploration of individual moral responsibility in a time of war. When individuals conclude that their leaders have violated fundamental ethical principles, what are they to do? Through the compelling personal stories of those in the U.S. and British government and military who struggled with these thorny issues during the war in Iraq, William F. Felice analyzes the degrees of moral responsibility that public officials, soldiers, and private citizens bear for the actions of their governments. Examining the struggles of these contemporary men and women, as well as of historical figures facing similar dilemmas, the author weighs the profound difficulties of overcoming the intense pressures of misguided loyalty, patriotism, and groupthink that predominate during war.
What is included with this book?