How To Be A Muslim 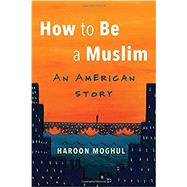 A searing portrait of Muslim life in the West, this “profound and intimate” memoir captures one man’s struggle to forge an American Muslim identity (Washington Post)

Haroon Moghul was thrust into the spotlight after 9/11, becoming an undergraduate leader at New York University’s Islamic Center forced into appearances everywhere: on TV, before interfaith audiences, in print. Moghul was becoming a prominent voice for American Muslims even as he struggled with his relationship to Islam. In high school he was barely a believer and entirely convinced he was going to hell. He sometimes drank. He didn’t pray regularly. All he wanted was a girlfriend.

But as he discovered, it wasn’t so easy to leave religion behind. To be true to himself, he needed to forge a unique American Muslim identity that reflected his beliefs and personality. How to Be a Muslim reveals a young man coping with the crushing pressure of a world that fears Muslims, struggling with his faith and searching for intellectual forebears, and suffering the onset of bipolar disorder. This is the story of the second-generation immigrant, of what it’s like to lose yourself between cultures and how to pick up the pieces.
Haroon Moghul builds Muslim-Jewish engagement at the Shalom Hartman Institute. He’s written for the Washington Post, the Guardian, Time, Foreign Policy, Haaretz, and CNN. He and his wife want to move back to New York.
1
You Go to Sleep, and You Wake Up Dead

2
How the Hell the Apple Fell

3
Linda Was a Cheerleader

4
Judge None Choose One

7
Which of These Two Land Cruisers Will You Deny?

8
And Shame Is the Sun

12
You Think You Need to Get Married

13
Between the Dome of the Rock and a Hard Place

14
Wake Me Up When September Ends

17
The Late, Great Mosques of Córdoba