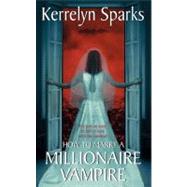 So what if he's a bit older and usually regards a human female as dinner, not a dinner date? Yes, Roman Draganesti is a vampire, but a vampire who lost one of his fangs sinking his teeth into something he shouldn't have. Now he has one night to find a dentist before his natural healing abilities close the wound, leaving him a lopsided eater for all eternity. Things aren't going well for Shanna Whelan either...After witnessing a gruesome murder by the Russian mafia, she's next on their hit list. And her career as a dentist appears to be on a downward spiral because she's afraid of blood. When Roman rescues her from an assassination attempt, she wonders if she's found the one man who can keep her alive. Though the attraction between them is immediate and hot, can Shanna conquer her fear of blood to fix Roman's fang? And if she does, what will prevent Roman from using his fangs on her...
How To Marry a Millionaire Vampire

Roman Draganesti knew someone had quietly entered hishome office. Either a foe or close friend. A friend, he decided.A foe could never make it past the guards at each entranceof his Upper East Side Manhattan townhouse. Orpast the guards stationed on each of the five floors.

With his excellent night vision, Roman suspected hecould see much better than his uninvited guest. His suspicionswere confirmed when the dark silhouette stumbledinto a Louis XVI bombé chest and cursed softly.

Gregori Holstein. A friend, but an annoying one. Thevice president of marketing for Romatech Industries tackledevery problem with tireless enthusiasm. It was enoughto make Roman feel old. Really old. "What do you want,Gregori?"

His guest whipped around and squinted in Roman's direction."Why are you sitting here, all alone in the dark?"

"Hmm. Tough question. I suppose I wanted to be alone.And in the dark. You should try it more often. Your nightvision is not what it should be."

"Why bother to practice my night vision when the city'slit up all night?" Gregori groped along the wall till he locatedthe switch. The lights came on with a muted goldenglow. "There, that's better."

Roman leaned back into the cool leather of his wingbackchair and took a sip from his wineglass. The liquid burnedhis throat. God-awful stuff. "Is there a purpose for yourvisit?"

"Of course. You left work too early, and we had somethingimportant to show you. You're going to love it."

Roman set his glass on the mahogany desk in front ofhim. "I have learned that we have plenty of time."

Gregori snorted. "Try to work up some excitement here.We had an amazing development at the lab." He noted Roman'shalf-empty glass. "I feel like celebrating. What areyou drinking?"

Gregori strode toward the wet bar. "Why? Are your tastestoo refined for me?" He grasped the decanter and sloshedsome red liquid into a wineglass. "Color looks good."

"Take my advice and get a new bottle from the fridge."

"Ha! If you can drink it, so can I." Gregori tossed back agood portion before slamming the glass down with a victorioussneer aimed at Roman. Then his eyes widened. Hisnormally pale face turned a purplish red. A strangled soundvibrated deep in his throat, and then the sputtering began.Coughing, followed by choked curses, followed by morecoughing. Finally he pressed his palms against the bar andleaned forward to gasp for air.

Gregori took a deep, shuddering breath. "What was inthere?"

"What the hell?" Gregori jerked to an upright position."Have you gone mad? Are you trying to poison yourself?"

"I thought I'd see if the old legends were true." Roman'smouth curled into a slight smile. "Obviously, some of usare more susceptible than others."

"Obviously, some of us like to live too damned dangerously!"Roman's attempt at a smile faded into oblivion. "Yourobservation would have more merit if we weren't alreadydead."

Gregori stalked toward him. "You're not going to startthat ‘woe is me, I'm a cursed demon from hell' crap again,are you?"

"Face the facts, Gregori. We have survived for centuriesby taking life. We are an abomination before God."

"You're not drinking this." Gregori wrenched the glassfrom Roman's hand and set it down out of his reach. "Listento me. No vampire has ever done more than you to protectthe living and tame the cravings within us."

"And now we're the most well-behaved pack of demoniccreatures on Earth. Bravo. Call the pope. I'm ready forsainthood."

Gregori's impatient look melted into curious speculation."Is it true what they say, then? You were once a monk?"

"I prefer not to live in the past."

Roman clenched his hands into fists. His past was a subjecthe would discuss with no one. "I believe you mentionedsome sort of development at the lab?"

"Oh, right. Sheesh, I left Laszlo waiting in the hall. Iwanted to set the scene, so to speak."

Roman took a deep breath and slowly relaxed his hands."Then I suggest you begin. There are only so many hoursin a night."

"Right. And I'm going out clubbing later. Simone justflew in from Paris, and boy—"

"—are her wings tired. That was old a century ago." Roman'shands fisted once again. "Stay on the subject, Gregori, or I will be forced to send you to your coffin for a timeout."

Gregori gave him an exasperated look. "I only mentionedit in case you wanted to join us. It's a hell of a lotmore fun than sitting here alone, drinking poison." He adjustedhis silk black tie. "You know, Simone has alwaysbeen hot for you. In fact, any of the ladies downstairswould love to cheer you up."

"I don't find them particularly cheerful. The last time Ilooked, they were all dead."

"Well, if you're going to be picky about it, maybe youshould try a live one."

"No." Roman jumped to his feet, grasped his wineglass,and zoomed with vampire speed to the wet bar in one second."Not a mortal. Never again."

"End of discussion." Roman poured the blood and garlicconcoction down the drain, then emptied the remainder ofthe poisonous brew from the decanter. He'd learned hislesson long ago. A relationship with a mortal could onlylead to heartbreak. Literally. And he'd rather not experiencea stake through the heart. What a great choice he hadfor companionship—a dead female Vamp or a live womanwho would want him dead. And it would never change.This heartless existence would stretch on and on for centuries.No wonder he was depressed ...

How To Marry a Millionaire Vampire. Copyright © by Kerrelyn Sparks. Reprinted by permission of HarperCollins Publishers, Inc. All rights reserved. Available now wherever books are sold.

Excerpted from How to Marry a Millionaire Vampire by Kerrelyn Sparks
All rights reserved by the original copyright owners. Excerpts are provided for display purposes only and may not be reproduced, reprinted or distributed without the written permission of the publisher.