The Human Tradition in the American Revolution 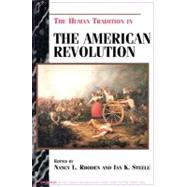 The story of the American Revolution is a familiar tale. The history books abound with the heroics of Washington, Jefferson, and Samuel Adams as they endeavored to free America from British rule. However, beyond the luminaries who took center stage in the struggle for independence were the myriad people who made their own impact on the American Revolution.

The Human Tradition in the American Revolution, edited by Nancy L. Rhoden and Ian K. Steele, is a collection of brief biographies of 17 individuals who lived during the Revolutionary Period. American society during that time was diverse and divided: it included patriots, loyalists, Native Americans, slaves, free African-Americans, and mercenaries, to name a few.

Written by leading historians, including Gary Nash, John Shy, and Edward J. Cashin, these minibiographies reveal how various facets of American society were touched by the conflict and how individual people reacted to this epic event.

This volume introduces patriots such as Virginian Arthur Lee who, along with Benjamin Franklin and Silas Deane,