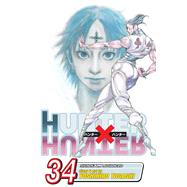 Plucky Gon’s quest to find his dad leads him into a whole world of crazy adventure.

Hunters are a special breed, dedicated to tracking down treasures, magical beasts, and even other people. But such pursuits require a license, and less than one in a hundred thousand can pass the grueling qualification exam. Those who do pass gain access to restricted areas, amazing stores of information, and the right to call themselves Hunters.

It's the fight everyone's been waiting for—Hisoka versus Chrollo! Robbed of his chance to fight Chrollo before, Hisoka's been itching to take on the former leader of the Phantom Troupe for a long time, and that day has finally come. With both combatants armed with incredible powers, it's a thrilling battle that defies the imagination! Find out which of these two titans wins!
Yoshihiro Togashi's manga career began in 1986 at the age of 20, when he won the coveted Osamu Tezuka Award for new manga artists. He debuted in the Japanese Weekly Shonen Jump magazine in 1989 with the romantic comedy Tende ShÃ´waru Cupid. From 1990 to 1994 he wrote and drew the hit manga YuYu Hakusho, which was followed by the dark comedy science-fiction series Level E and the adventure series Hunter x Hunter. In 1999 he married the manga artist Naoko Takeuchi.