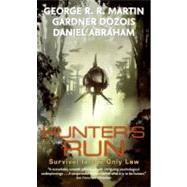 Running from poverty and hopelessness, Ramón Espejo boarded one of the great starships of the mysterious, repulsive Enye. But the new life he found on the far-off planet of São Paulo was no better than the one he abandoned. Then one night his rage and too much alcohol get the better of him. Deadly violence ensues, forcing Ramón to flee into the wilderness.Mercifully, almost happily alone-far from the loud, bustling hive of humanity that he detests with sociopathic fervor-the luckless prospector is finally free to search for the one rich strike that could make him wealthy. But what he stumbles upon instead is an advanced alien race in hiding: desperate fugitives, like him, on a world not their own. Suddenly in possession of a powerful, dangerous secret and caught up in an extraordinary manhunt on a hostile, unpredictable planet, Ramón must first escape . . . and then, somehow, survive.And his deadliest enemy is himself.
Hunter's Run

Ramón Espejo lifted his chin, daring his opponent to strike. The crowd that filled the alleyway behind the ramshackle bar called the El Rey formed a ring, bodies pressing against each other in the tension between coming close enough to see and retreating to a safe distance. Their voices were a mixture of shouts urging the two men to fight and weak, insincere exhortations to make peace. The big man bobbing and weaving across the narrow circle from him was a pale European, his cheeks flushed red from liquor, his wide, soft hands balled into fists. He was taller than Ramón, with a greater reach. Ramón could see the man's eyes shifting, as wary of the crowd as of Ramón.

"Come on, pendejo," Ramón said, grinning. His arms were raised and spread, as if he were ready to embrace the fighter. "You wanted power. Come have a taste of it."

The shifting LEDs of the bar's signs turned the night blue and red and amber in turn. Far above them all, the night sky shone with countless stars too bright and close for the lights of Diegotown to drown.

The constellation of the Stone Man stared down at them as they circled, a single star smoldering balefully like a red eye, as if it was watching, as if it was urging them on.

"I ought to do it, you ugly little greaser!" the European spat. "I ought to go ahead and kick your skinny ass!"

Ramón only bared his teeth and motioned the man nearer. The European wanted this to be a talking fight again, but it was too late for that. The voices of the crowd merged into a single waterfall roar. The European made his move, graceless as a falling tree; the great left fist made its slow way through the air, moving as though through molasses. Ramón stepped inside the swing, letting the gravity knife slip from his sleeve into his hand. He flicked the blade open in the same motion that brought his fist against the larger man's belly.

A look of almost comical surprise crossed the European's face. His breath went out of him with a whoof.

Ramón stabbed twice more, fast and hard, twisting the knife just to be sure. He was close enough to smell the nose-tingling reek of the flowery cologne the man wore, to feel his licorice-scented breath panting against his face. The crowd went silent as the European slipped to his knees and then sat, legs spread, in the filthy muck of the alley. The big, soft hands opened and closed aimlessly, slick with blood that turned pale when the LEDs were red, black when the light shifted blue.

The European's mouth gaped open, and blood gushed out over his teeth. Slowly, very slowly, seeming to move in slow motion, he toppled sideways to the ground. Kicked his feet, heels drumming the ground. Was still.

Someone in the crowd uttered an awed obscenity.

Ramón's shrill, self-satisfied pleasure faded. He looked at the faces of the crowd—wide eyes, mouths open in little surprised O's. The alcohol in his blood seemed to thin, sobriety floating to the top of his mind. A sinking sense of betrayal possessed him—these people had been pushing him on, encouraging the fight. And now they were abandoning him for winning it!

"What?" Ramón shouted to the other patrons of the El Rey. "You heard what he was saying! You saw what he did!"

But the alley was emptying. Even the woman who'd been with the European, the one who had started it all, was gone. Mikel Ibrahim, the manager of the El Rey, lumbered toward him, his great bear-like face the image of patient, saintly suffering. He held out his wide hand. Ramón lifted his chin again, thrust out his chest, as if Mikel's gesture was an insult. The manager only sighed and shook his head slowly back and forth, and made a pulling gesture with his fingers. Ramón curled his lip, half turned away, then slapped the handle of the knife into the waiting palm.

"Police are coming," the manager warned. "You should go home, Ramón."

"You saw what happened," Ramón said.

"No, I wasn't here when it happened," Mikel said. "And neither were you, eh? Now go home. And keep your mouth shut."

Ramón spat on the ground and stalked into the night. It wasn't until he began to walk that he understood how drunk he was. At the canal by the plaza, he squatted down, leaned back against a tree, and waited until he was sure he could walk without listing. Around him, Diegotown spent its week's wages on alcohol and kaafa kyit and sex. Music tumbled in from the rough gypsy houseboats on the canal; fast, festive accordion mixing with trumpets and steel drums and the shouts of the dancers.

Somewhere in the darkness, a tenfin was calling mournfully, a "bird" that was really a flying lizard, and sounded uncannily like a woman sobbing in misery and despair, something that had led the superstitious Mexican peasants who made up a large percentage of the colony's population to say that La Llorona, the Crying Woman, had crossed the stars with them from Mexico and now wandered the night of this new planet, crying not only for all the children who'd been lost and left behind on Earth, but for all the ones who would die on this hard new world.

He, of course, didn't believe in such crap. But as the ghostly crying accelerated to a heartbreaking crescendo, he couldn't help but shiver.

Alone, Ramón could regret stabbing the European; surely it would have been enough just to punch him around, humiliate him, slap him like a bitch? But when Ramón was drunk and angry, he always went too far. Ramón knew that he shouldn't have drunk so much, and that whenever he got around people, it always seemed to end like this. He'd begun his evening with . . .

Excerpted from Hunter's Run by George R. R. Martin, Gardner Dozois, Daniel Abraham
All rights reserved by the original copyright owners. Excerpts are provided for display purposes only and may not be reproduced, reprinted or distributed without the written permission of the publisher.