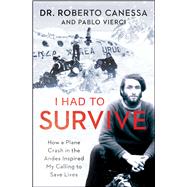 Dr. Roberto Canessa recounts his side of the famous 1972 plane crash of Uruguayan Air Force Flight 571 in the Andean Mountains and how, decades later, the harrowing journey to survive propelled him to become one of the world’s leading pediatric cardiologists, seeing in his patients the same fierce will to live he witnessed in the Andes.

As he tended to his wounded Old Christians teammates amidst the devastating carnage, rugby player Roberto Canessa, a second-year medical student at the time, realized that no one on earth was luckier: he was alive—and for that, he should be eternally grateful. As the starving group struggled beyond the limits of what seemed possible, Canessa played a key role in safeguarding his fellow survivors, eventually trekking with a companion across the hostile mountain range for help.

No one could have imagined that there were survivors from the accident in such extreme conditions. Canessa's extraordinary experience on the fine line between life and death became the catalyst for the rest of his life.

This uplifting tale of hope and determination, solidarity and ingenuity, gives vivid insight into the world-famous story that inspired the movie Alive! Canessa also draws a unique and fascinating parallel between his work as a doctor diagnosing very complex congenital cardiopathies in unborn and newborn infants and the difficult life-changing decisions he was forced to make in the Andes. With grace and humanity, Canessa prompts us to ask ourselves: what do you do when all the odds are stacked against you?
Dr. Roberto Canessa shocked the world in December 1972 when he and Fernando Parrado arrived in Chile after surviving a horrific plane crash and then hiking across the Andes mountains for ten days at an altitude of 16,404 feet and temperatures of twenty-two degrees below zero. Canessa and Parrado guided a rescue party back to their fourteen friends who were still trapped on the mountain two months after the initial search for them had been called off. Dr. Canessa went on to become a pediatric cardiologist, world-renowned for his work with newborn patients and prenatal echocardiography at the Hospital Italiano of Montevideo.

Pablo Vierci is a native of Montevideo, Uruguay, who is also an Italian citizen. He is an award-winning author and scriptwriter.