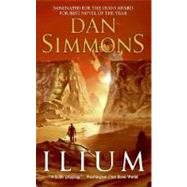 From the Hugo Award-winning author of the Hyperion Cantos comes the first book of a breathtaking new saga based on the themes of Homer's "The Iliad" and Shakespeare's "The Tempest."
Ilium

The Plains of Ilium

Oh, and sing of me, O Muse, poor born-again-against-his-will Hockenberry—poor dead Thomas Hockenberry, Ph.D., Hockenbush to his friends, to friends long since turned to dust on a world long since left behind. Sing of my rage, yes, of my rage, O Muse, small and insignificant though that rage may be when measured against the anger of the immortal gods, or when compared to the wrath of the god-killer, Achilles.

On second thought, O Muse, sing of nothing to me. I know you. I have been bound and servant to you, O Muse, you incomparable bitch. And I do not trust you, O Muse. Not one little bit.

If I am to be the unwilling Chorus of this tale, then I can start the story anywhere I choose. I choose to start it here.

It is a day like every other day in the more than nine years since my rebirth. I awaken at the Scholia barracks, that place of red sand and blue sky and great stone faces, am summoned by the Muse, get sniffed and passed by the murderous cerberids, am duly carried the seventeen verticalmiles to the grassy summits of Olympos via the high-speed east-slope crystal escalator and—once reported in at the Muse's empty villa—receive my briefing from the scholic going off-shift, don my morphing gear and impact armor, slide the taser baton into my belt, and then QT to the evening plains of Ilium.

If you've ever imagined the siege of Ilium, as I did professionally for more than twenty years, I have to tell you that your imagination almost certainly was not up to the task. Mine wasn't. The reality is far more wonderful and terrible than even the blind poet would have us see.

First of all there there is the city, Ilium, Troy, one of the great armed poleis of the ancient world—more than two miles away from the beach where I stand now but still visible and beautiful and domineering on its high ground, its tall walls lighted by thousands of torches and bonfires, its towers not quite as topless as Marlowe would have us believe, but still amazing—tall, rounded, alien, imposing.

Then there are the Achaeans and Danaans and other invaders—technically not yet "Greeks" since that nation will not come into being for more than two thousand years, but I will call them Greeks anyway—stretched mile after mile here along the shoreline. When I taught the Iliad, I told my students that the Trojan War, for all its Homeric glory, had probably been a small affair in reality—some few thousands of Greek warriors against a few thousand Trojans. Even the best informed members of the scholia—that group of Iliad scholars going back almost two millennia—estimated from the poem that there could not possibly be more than 50,000 Achaeans and other Greek warriors drawn up in their black ships along the shore.

They were wrong. Estimates now show that there are more than 250,000 attacking Greeks and about half that number of defending Trojans and their allies. Evidently every warrior hero in the Greek Isles came running to this battle—for battle meant plunder—and brought his soldiers and allies and retainers and slaves and concubines with him.

The visual impact is stunning: mile upon mile of lighted tents, campfires, sharpened-stake defenses, miles of trenches dug in the hard ground above the beaches—not for hiding and hunkering in, but as a deterrent to Trojan cavalry—and, illuminating all those miles of tents andmen and shining on polished spears and bright shields, thousands of bonfires and cooking fires and corpse fires burning bright.

For the past few weeks, pestilence has been creeping through the Greek ranks, first killing donkeys and dogs, then dropping a soldier here, a servant there, until suddenly in the past ten days it has become an epidemic, slaying more Achaean and Danaan heroes than the defendersof Ilium have in months. I suspect it is typhus. The Greeks are sure it is the anger of Apollo.

I've seen Apollo from a distance—both on Olympos and here—and he's a very nasty fellow. Apollo is the archer god, lord of the silver bow, "he who strikes from afar," and while he's the god of healing, he's also the god of disease. More than that, he's the principle divine ally of the Trojans in this battle, and if Apollo were to have his way, the Achaeans would be wiped out. Whether this typhoid came from the corpse-fouled rivers and other polluted water here or from Apollo's silver bow, the Greeks are right to think that he wishes them ill.

At this moment the Achaean "lords and kings"—and every one of these Greek heroes is a sort of king or lord in his own province and in his own eyes—are gathering in a public assembly . . .

Excerpted from Ilium by Dan Simmons, Dan Simmons
All rights reserved by the original copyright owners. Excerpts are provided for display purposes only and may not be reproduced, reprinted or distributed without the written permission of the publisher.