Indians of the Pacific Northwest 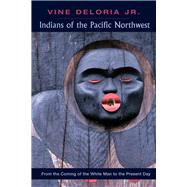 The Pacific Northwest was one of the most populated and prosperous regions for Native Americans before the coming of the white man. By the mid-1800s, measles and smallpox decimated the Indian population, and the remaining tribes were forced to give up their ancestral lands. Vine Deloria Jr., named one of the most influential religious thinkers in the world, tells the story of these tribes' fight for survival, one that continues today. Billy Frank Jr.was the first recipient of Indian Country Today's American Indian Visionary Award. Steve Pavlikis a professor of Native American studies at Northwest Indian College.
Vine Deloria Jr. is a leading Native American scholar whose research writings, and teaching have encompassed history, law, religious studies, and political science. He is the former executive director of the National Congress of American Indians. Named by Time magazine as one of the eleven greatest religious thinkers of the twentieth century, he is the author of numerous acclaimed books, including God is Red, Custer Died for Your Sins, Power and Place, and Red Earth, White Lies. Mr. Deloria lives in Golden, Colorado.

Steve Pavlik is a professor of Native American studies at Northwest Indian College.
What is included with this book?