Industrialization and Social Conflict in the Gilded Age 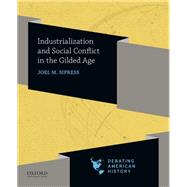 Embracing an argument-based model for teaching history, the Debating American History series encourages students to participate in a contested, evidence-based discourse about the human past. Each book poses a question that historians debate--How democratic was the U.S. Constitution? or Why did
civil war erupt in the United States in 1861?--and provides abundant primary sources so that students can make their own efforts at interpreting the evidence. They can then use that analysis to construct answers to the big question that frames the debate and argue in support of their position.

Industrialization and Social Conflict in the Gilded Age poses this big question: Why was industrialization in the late nineteenth century accompanied by such great social and political turmoil?

List of Figures
About the Author
Acknowledgments
Introduction
I. The Big Question
II. Timeline
III. Historian's Conversations
Position #1: A Time of Turmoil: Class War in Industrializing America
Position #2: The Birth Pangs of the Modern Age: Cultural Change and Social Conflict in Industrializing America
IV. Debating the Question
A. Primary Sources on Labor
Excerpt from International Harvester Brochure (1912)
Morris Rosenfeld, "In the Factory" (1914)
Platform of the Knights of Labor (1878)
Declaration of Principles of the New York Central Labor Union (1880s)
Samuel Gompers on the Issue of Strikes (1899)
Andrew Carnegie, "An Employer's View of the Labor Question" (1886)
United States v. Workingmen's Amalgamated Council of New Orleans, et al. (1893)
"The Tramps' Terror" (1877)
B. Primary Sources on Populism
The Omaha Platform (1892)
"Sockless Jerry" Simpson, "The Political Rebellion in Kansas" (1891)
Bettie Gay, "The Influence of Women in the Alliance" (1891)
Populist Letters to the Colfax Chronicle (1890-1891)
"What God Freely Gives to Man, Monopoly Appropriates" (1895)
"The Farmer is the Man" (1927)
William Allen White, "What's the Matter with Kansas" (1896 and 1946)
C. Case Studies
The Homestead Strike of 1892
The Louisiana Sugar War of 1887
The New York City Kosher Meat Boycott of 1902
D. Economic Data
V. Additional Resources
Index