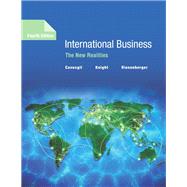 For courses in Business.

International Business: The New Realities caters to a millennial audience, the most diverse and educated generation to date. The book speaks to readers of the technological age, facing a diverse and evolving economic environment fueled by the Internet and multimedia sources. By addressing issues such as the competitive job market and challenges faced by advanced economies, the text prepares readers for international business in our modern world.

The Fourth Edition plays on millennials characteristics to engage them in the material. This includes their reliance on technology, their drive towards achievement and helping their communities, and their desire to obtain skills they can apply towards meaningful jobs. The authors understand what motivates millennial readers and builds on their goals to help them obtain successful careers in international business.

MyManagementLab is an online homework, tutorial, and assessment program designed to work with this text to engage students and improve results. Within its structured environment, students practice what they learn, test their understanding, and pursue a personalized study plan that helps them better absorb course material and understand difficult concepts.

NOTE: You are purchasing a standalone product; MyManagementLab does not come packaged with this content. If you would like to purchase both the physical text and MyManagementLab search for:

Professor Cavusgil has been mentoring students, executives, and educators in international business for the past four decades. A native of Turkey, his professional work has taken him to numerous other emerging markets.


Previously, Tamer served as Senior Fulbright Scholar to Australia and taught at Monash University. Tamer also served as a visiting professor at Manchester Business School, and held the Gianni and Joan Montezemolo Visiting Chairat the University of Cambridge, U.K., where he is also an Honorary Fellow of Sidney Sussex College. At Michigan State University, where he served for 21 years, he was the inaugural holder of the John Byington Chair in Global Marketing and Founding Director of CIBER.

Professor Cavusgil is an elected Fellow of the Academy of International Business, a distinction earned by a select group of intellectual leaders in international business. He also served as Vice President of the AIB, and on the Board of Directors of the American Marketing Association.

Tamer holds a Bachelor of Science degree in business and economics from the Middle East Technical University in Ankara, Turkey. He earned his MBA and PhD degrees in business from the University of Wisconsin.

Professor Gary Knight has been teaching international business for more than 20 years. A native of the United States, he has lived and worked in many countries around the world.

Gary has been an invited speaker at institutions worldwide and developed study abroad programs in Asia, Europe, and Latin America. He has won several awards, including the Jerry Hudson Award for Excellence in Teaching, Willamette University, and Best Teacher in the MBA Program, Florida State University.

Gary won the Hans Thorelli Best Paper Award for his article “Entrepreneurship and Strategy: The SME Under Globalization.” Along with S. Tamer Cavusgil, he won the 2014 Decade Award at the Journal of International Business Studies for their article on born global firms.

Gary is ranked in the top five percent of scholars who have published in the Journal of International Business Studies since 1995, based on the number of articles published. He recently was ranked one of the top 10 scholars in the United States, and top 15 worldwide, in international business research impact based on Google Scholar citation data. He is on the editorial review boards of several international journals. He has provided expert testimony on global commerce and small business to the U.S. House of Representatives.

Gary is Chair of the Academy of International Business, Western United States Chapter. Prior to joining academia, he was Export Manager of a medium-sized enterprise, directing the firm’s operations in Canada, Europe, Japan, and Mexico and supervising some 50 distributors. He enjoyed a brief career in banking and as a teacher inJapan.

Gary earned his MBA at the University of Washington and PhD at Michigan State University, both in international business. Earlier degrees were in finance and modern languages. He also attended the University of Paris in France and Sophia University in Japan and is fluent in French, Japanese, and Spanish.

John serves as a member of the Board of Directors of the Ontario Institute for Cancer Research.He was a member of the Global Advisory Board of the American Marketing Association. He served as an Executive in Residence at the Michigan State University Center for International Business Education and Research. He served on the Editorial Review Board of the Journal of International Marketing. He served as Chairman of the Industry Advisory Board’s “Value of Marketing Program,” SEI Center for the Advanced Studies in Management at the Wharton School of the University of Pennsylvania. He is the former chairman of the Pharmaceutical Manufacturing Association Marketing Practices Committee. Professor Riesenberger is the coauthor, with Robert T. Moran, of The Global Challenge: Building the New Worldwide Enterprise (McGraw-Hill, London).

John holds a Bachelor of Science degree in Economics—Business and an MBA in Management from Hofstra University. He attended the Harvard Business School’s International Senior Management Program.

1. Introduction: What Is International Business?

4. The Cultural Environment of International Business

6. Theories of International Trade and Investment

11. The International Monetary and Financial Environment

12. Strategy and Organization in the International Firm

16. Licensing, Franchising, and Other Contractual Strategies

18. Marketing in the Global Firm

20. Financial Management and Accounting in the Global Firm