Iron Age and Romano-british Settlements and Landscapes of Salisbury Plain 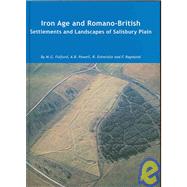 This volume presents the results of a series of fieldwalking surveys and excavations of Iron Age and Romano-British sites in two areas of the Salisbury Plain Training Area. Altogether some 18 new settlement sites were discovered of which 13 were Romano-British, three were predominantly Iron Age, and two produced evidence of Middle-Late Bronze Age occupation. Small-scale excavation was undertaken at eight enclosures and field systems, accompanied by targeted environmental sampling.An increase in enclosure through to the later Iron Age was revealed, when there was evidence for settlement abandonment followed by a further development of unenclosed settlement and the emergence of nucleated villages such as Chisenbury Warren in the Late Iron Age and through the Romano-British period.
What is included with this book?