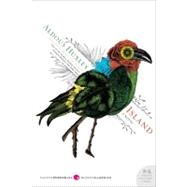 In his final novel, which he considered his most important, Aldous Huxley transports us to the remote Pacific island of Pala, where an ideal society has flourished for 120 years.

Inevitably, this island of bliss attracts the envy and enmity of the surrounding world. A conspiracy is underway to take over Pala, and events are set in motion when an agent of the conspirators, a newspaperman named Faranby, is shipwrecked there. What Faranby doesn't expect is how his time with the people of Pala will revolutionize all his values andto his amazementgive him hope.

A mirror for modern man. . . . Should be read and reread. -Saturday Review

"Attention," a voice began to call, and it was as though an oboe had suddenly become articulate. "Attention," it repeated in the same high, nasal monotone. "Attention."

Lying there like a corpse in the dead leaves, his hair matted, his face grotesquely smudged and bruised, his clothes in rags and muddy, Will Farnaby awoke with a start. Molly had called him. Time to get up. Time to get dressed. Mustn't be late at the office.

"Thank you, darling," be said and sat up. A sharp pain stabbed at his right knee and there were other kinds of pain in his back, his arms, his forehead.

"Attention," the voice insisted without the slightest change of tone. Leaning on one elbow, Will looked about him and saw with bewilderment, not the gray wallpaper and yellow curtains of his London bedroom, but a glade among trees and the long shadows and slanting lights of early morning in a forest.

Why did she say, "Attention"?

The name seemed to open a window inside his head. Suddenly, with that horribly familiar sense of guilt at the pit of the stomach, he smelt formaldehyde, he saw the small brisk nurse hurrying ahead of him along the green corridor, heard the dry creaking of her starched clothes. "Number fifty-five," she was saying, and then halted, opened a white door. He entered and there, on a high white bed, was Molly. Molly with bandages covering half her face and the mouth hanging cavernously open. "Molly," he had called, Molly . . ." His voice had broken, and he was crying, was imploring now, "My darling!" There was no answer. Through the gaping mouth the quick shallow breaths came noisily, again, again. "My darling, my darling . . ." And then suddenly the hand he was holding came to life for a moment. Then was still again.

Once more the fingers stirred. Slowly, with what was evidently an enormous effort, they closed themselves over his own, pressed them for a moment and then relaxed again into lifelessness.

It had been an accident, be hastened to assure himself. The road was wet, the car had skidded across the white line. It was one of those things that happen all the time. The papers are full of them; he had reported them by the dozen. "Mother and three children killed in head-on crash . . ." But that was beside the point, The point was that, when she asked him if it was really the end, he had said yes; the point was that less than an hour after she had walked out from that last shameful interview into the rain, Molly was in the ambulance, dying.

He hadn't looked at her as she turned to go, hadn't dared to look at her. Another glimpse of that pale suffering face might have been too much for him. She had risen from her chair and was moving slowly across the room, moving slowly out of his life. Shouldn't he call her back, ask her forgiveness, tell her that he still loved her? Had he ever loved her?

For the hundredth time the articulate oboe called him to attention.

Yes, had he ever really loved her?

"Good-bye, Will," came her remembered whisper as she turned back on the threshold. And then it was she who had said it -- in a whisper, from the depths of her heart. "I still love you, Will -- in spite of everything."

A moment later the door of the flat closed behind her almost without a sound. The little dry click of the latch, and she was gone.

He had jumped up, had run to the front door and opened it, had listened to the retreating footsteps on the stairs. Like a ghost at cockcrow, a faint familiar perfume lingered vanishingly on the air. He closed the door again, walked into his gray-and-yellow bedroom and looked out the window. A few seconds passed, then he saw her crossing the pavement and getting into the car. He heard the shrill grinding of the starter, once, twice, and after that the drumming of the motor. Should he open the window? "Wait, Molly, wait," he heard himself shouting in imagination. The window remained unopened; the car began to move, turned the comer and the street was empty. It was too late. Too late, thank God! said a gross derisive voice. Yes, thank God! And yet the guilt was there at the pit of his stomach. The guilt, the gnawing of his remorse -- but through the remorse he could feel a horrible rejoicing. Somebody low and lewd and brutal, somebody alien and odious who was yet himself was gleefully thinking that now there was nothing to prevent him from having what he wanted. And what he wanted was a different perfume, was the warmth and resilience of a younger body. "Attention," said the oboe. Yes, attention. Attention to Babs's musky bedroom, with its strawberry-pink alcove and the two windows that looked onto the Charing Cross Road and were looked into, all night long, by the winking glare of the big sky sign for Porter's Gin on the opposite side of the street. Gin in royal crimson -- and for ten seconds the alcove was the Sacred Heart, for ten miraculous seconds the flushed face so close to his own glowed like a seraph's, transfigured as though by an inner fire of love. Then came the yet profounder transfiguration of darkness. One, two, three, four ... Ah God, make it go on forever! But punctually at the count of ten the electric clock would turn on another revelation -- but of death, of the Essential Horror; for the lights, this time, were green, and for ten hideous seconds Babs's rosy alcove became a womb of mud and, on the bed, Babs herself was corpse-colored, a cadaver galvanized into posthumous epilepsy.

Excerpted from Island by Aldous Huxley
All rights reserved by the original copyright owners. Excerpts are provided for display purposes only and may not be reproduced, reprinted or distributed without the written permission of the publisher.