Jack and the Beanstalk A Folktale 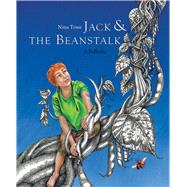 ‘Fee, Fie, Fo, Fum!’ Jack and his mother are so poor they decide to sell their faithful brown cow. But Jack takes only a handful of beans from a stranger in exchange for the animal! His mother is furious but little does she know that these beans are magic and soon will grow into an enormous beanstalk reaching as far as the eye can see. And at the very top lives a terrifying Giant who Jack must outwit to survive. Nina Töwe’s illustrations are inspired by the sixteenth-century paintings of Giuseppe Arcimboldo, best-known for creating imaginative portrait heads made entirely of objects such as fruit, flowers, vegetables and fish.
Nina Töwe studied illustration, specializing in children’s books, at the Academy of Applied Arts and Sciences. She now works as a freelance illustrator.